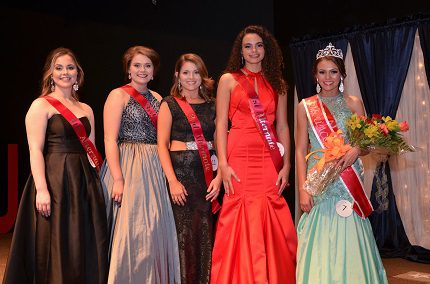 Mikayla Lemley, 19, of Morrilton was crowned Ms. UACCM 2017 after competing in the 11th Annual UACCM Pageant on Nov. 4 at the University of Arkansas Community College at Morrilton’s Fine Arts Auditorium.


Lemley, who was also crowned Ms. UACCM in 2016, is a daughter of Scott and Kim Lemley of Morrilton. She is a second-year student at UACCM, pursing an associate of arts degree in general education. After completing the necessary courses, Lemley plans to transfer to the University of Arkansas for Medical Sciences in Little Rock to earn a bachelor of science in nursing degree and become a neonatal nurse.

While at UACCM she has been honored with several scholarships and has been listed on the Honor Roll.


Lemley was awarded a $1,000 scholarship from the UACCM’s Chancellor’s Office, a product basket courtesy of Hairport of Morrilton, a tanning package courtesy of Copper Tanz and a necklace with essential oil from Young Living and Karen Caig. She also received gift certificates from several Morrilton businesses, including Magie Ford Lincoln Co., Merle Norman & More, Peace of Mine Yoga Studio, Pure Bliss, and Southern Roots Hair Salon.


Hosted by UACCM’s SkillsUSA chapter, the pageant was open to current UACCM students and girls between the ages of birth and 17 years old. Apart from seven additional categories, those who competed for the title of Ms. UACCM were judged on beauty, professionalism, speech presentation and interview skills.


“Our students, Registered Student Organizations, faculty, staff and six-county area community have really stepped up to support our SkillsUSA chapter, and it has made me so proud to be a part of this event,” Jayson Millheim, UACCM’s SkillsUSA chapter advisor. “It is a wonderful blessing to see the support these young women have from their families, friends and each other.”


The winners of each category: