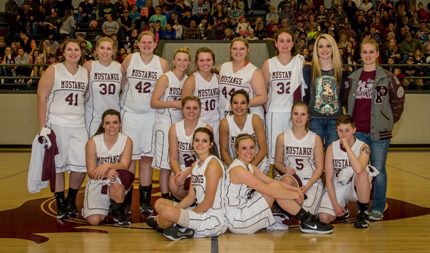 
The Perryville Lady Mustangs are headed to the regional tournament after recently winning their district tournament for the first time since 2006.


“We knew it would be tough because our conference has been so difficult the last two years, but we felt like we had paid our dues,” Smith said. “We knew we had a lot of talented and experienced players coming back, and they had a great desire to win the conference. They have worked hard since last spring to achieve many things, and winning the conference was one of the goals they set.”


The Lady Mustangs went undefeated in the 5-3A conference, but that was far from the only highlight for Perryville this season.


“We have had some big moments this season,” Smith said. “Getting to the finals of the St. Joseph Classic was a big achievement against a very tough field. Things really started rolling when we won the Yell County Tournament over Christmas break. The biggest triumph, though, has been the ability of this team to come together and form a common bond and focus on every challenge they have faced.”


“The teams in the other half of the region are very talented and well coached,” Smith said. “We certainly have our work cut out for us. Our community support has been amazing. Our teams have been overwhelmed by the game attendances and the kind things they have done for us throughout the year.


“We want to thank everyone for all they have done, and we will do everything we can to make them proud to be Perryville Mustangs!”