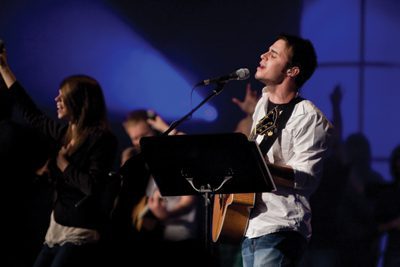 Most AI contestants have a flair for the dramatic, crave the camera’s gaze and are looking out for themselves above all others.
But Kris? To his friends he’s just a quiet guy from Central Arkansas.
“He’s not a drama king,” said University of Central Arkansas Chi Alpha Director Matt Carpenter. “He’s just a real humble guy.”
The 23-year-old Conway resident was voted into the Top 13 of AI’s eighth season on Feb. 26. He has led singing at Chi Alpha the last three years after becoming involved with the student ministry in 2004. Although Allen has performed in front of millions of viewers on AI, he hasn’t always been comfortable performing in front of a crowd.
“He got in a small group I was leading as a freshman, and he was always really quiet and laid back,” Carpenter said. “We took the group on a camping trip, and there were several of his friends sitting around the campfire playing guitars and singing. Even in that small of a setting, he was shy enough that he wouldn’t play or sing. He was very timid to start off.”
In the summer of 2004, Allen traveled to Spain and Morocco with Carpenter and 30 other members of Chi Alpha. The experience was a catalyst for change in Allen.
“He really came out of his shell on that trip,” Carpenter said. “God did some amazing things for him that summer. He led worship for us, and that’s when he started to come into his own.
“God has an opportunity to shape us through those kinds of experiences, and Kris was open to that. I think he changed from being a nominal Christian, wondering what his place was in life, to taking that step to connect with God’s purpose in his life.”
Brandon Shatswell, executive worship pastor at New Life Church in Conway, was on the same mission trip with Chi Alpha when he first met Allen. Shatswell was in charge of leading the music on the trip.
“I arrived a week later than everyone else, so Kris had to help lead the services until I got there,” Shatswell said. “I had never met him, and when I got there and heard him sing and play his guitar, I was impressed immediately.
“He’s probably the best male singer I know.”
When Shatswell took over as the worship leader at NLC in 2006, he knew he wanted Allen to be on the team.
“One of Kris’ strong points is that he will do anything I ask of him,” Shatswell said. “He has a humble personality. I could put him on stage and never have him lead a song, and he would be fine with that.”
Carpenter had a similar impression of Allen.
“What makes Kris unique from a lot of worship leaders is his humility and heart of service,” Carpenter said. “Talented musicians tend to be prima donnas and enjoy the spotlight, and that detracts from worshipping God. Kris truly wants God to receive all the glory.
“Even through American Idol, that’s been something he has wanted. When I’ve talked to him about the show, he’s always had a good feeling about the experience. He believes that whatever happens from the show, it’s because God has allowed it.”
Allen’s talents as a musician are exceeded only by his heart.
“The most important thing in leading worship is someone’s heart,” Carpenter said. “When we have gifts and talents, they come out the best in the service God has called us to do. Kris is doing that.”
On a show like AI, it’s easy for contestants to feel pressure to change who they are to avoid getting lost in the shuffle, but Shatswell said he is confident that Allen will remain true to himself.
“Kris always adds a soulful, bluesy flair to what he does,” Shatswell said. “He doesn’t stick out, but he always retains his style. With his connection with God, good family support and his healthy, young marriage, I think he can maintain a consistency with who he is.”
Allen’s opportunity has left a lasting impression on those close to him.
“It has been one of the best experiences of my life seeing Kris get this opportunity,” Shatswell said. “It’s not just the TV thing. When you have a friend that you know is so gifted, to see him be blessed like this has been amazing.”