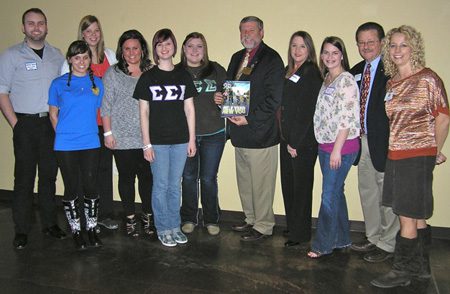 Kiwanis International President Alan Penn (holding 501 LIFE) of Medina, Ohio, along with members of the Circle K Club at the University of Central Arkansas and leadership from the Conway club were “Loving LIFE” during Penn’s visit last week to Conway.


Penn stressed the importance of the continued emphasis by Kiwanians toward their youth Service Leadership programs. The Conway Kiwanis Club sponsors both a Circle K club at UCA and a Key Club at Conway High School. Key Club is the oldest and largest youth service leadership organization in the country.

Penn also urged the district to press on in their efforts toward the international children’s campaign, called the Eliminate Project.  Kiwanis is partnering with UNICEF to raise $110,000,000 in seeking to rid the world of a serious disease known as MNT or Maternal Neonatal Tetanus. This disease kills one baby every nine minutes in the world. Kiwanis is raising money to help inoculate mothers in countries where unsafe birthing techniques are prevalent. Along with the immunizations, the money will be used to educate these areas of the world in safe birthing practices. A series of three shots, costing a total of $1.80, can save the life of a mother and her unborn child.


After the meeting, Penn and his wife, Jeri, traveled to Northwest Arkansas where the Missouri-Arkansas Kiwanians will hold the Mid-Winter conference in Springdale.


The Conway club is the largest Kiwanis club in the Mo-Ark District. They have a membership that is active in providing service to the Conway community in trying to continually make it a better place for children.

The motto of Kiwanis International is “Serving the Children of the World.”