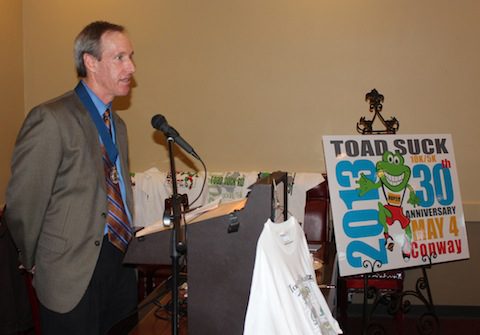 
It was a time of remembering and recognition as the Conway Kiwanis Club celebrated the last 30 years of the Toad Suck Daze Run.


The program for this week’s club meeting was devoted to the event, which has raised more than $300,000 and benefitted countless local non-profits.

As part of the program, president Rick Sublett announced run committee chairman Cliff Henry as the recipient of a Walter Zeller Fellow through a donation made by the club on his behalf.


“Cliff has provided leadership to the Toad Suck Daze Run for more than 20 years,” said Rick. “He organizes the race, its sponsors and volunteers all in memory of a childhood friend, Randy Baker, who died in his 20s of brain cancer. Cliff feels that his participation and leadership is a way of honoring Randy’s memory.


“Cliff spends countless hours to make the run a success each year, but he is always quick to direct the credit to others.”


Henry – who was greeted with a standing ovation after the announcement – was humbled by the award and accepted it on behalf of the run committee, which he had recognized earlier in the meeting as well as sponsors and other key individuals involved in making each year a success. He also introduced two members of the Baker family – Randy’s mom Marion and his sister Barbara – who attended the meeting.


During the program, Randy Sims – wearing a 1992 run T-shirt – reflected on the early years when a race sponsored by First National Bank (now Regions) combined with the Toad Suck Run, sponsored by the Kiwanis Club. He also shared some of his fondest memories of the race, including one year when runners finished in “world record time.”


“Somebody turned somebody the wrong way,” Sims said with a laugh.


Sims said there were many friendships made through organizing the event. “The best thing I remember from the races and years we did it was the relationships built” and the money donated to charity, he said.


Representatives of two non-profits that have received run proceeds – Courtney Leach with Community Connections and Philip Fletcher with City of Hope Outreach – shared with members how important the donations have been to their organizations.


For more information or to register, visit toadsuckrun.com.