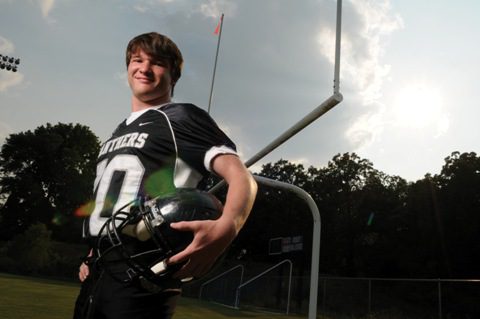 
Bret Kagebein and the Bigelow Panthers face the biggest game of their season this Friday at home against Magnet Cove. The 5-2A conference could very well hang in the balance of this game’s result.


“Magnet Cove, we’ve got to get them back this year,” Kagebein said.


Kagebein, a senior lineman for Bigelow, was nominated by his coach, Jeff Starks, and selected to this year’s 501 Football Team.


“Bret is a tough, hardnosed, gritty player on the field,” Starks said in his nomination. “[Off the field], he’s a polite, soft spoken, smart kid. Bret plays within the rules of the game and takes no shortcuts. He encourages his teammates to be the best they can be on the field and in the classroom.”


Bigelow’s only loss in the regular season in 2012 came in Week 8 to 5-2A champ Magnet Cove. Bigelow beat Conway Christian in Week 10, 41-38, to close the season and take second place in the conference. The Panthers played host to Brinkley in the first round of the playoffs, notching a 20-6 victory. Bigelow’s season came to an end the next week at Salem, 46-13.


Kagebein and the Panthers are looking for revenge against Magnet Cove and for a deeper playoff run.


“We came up a little shorter than we thought we would last year,” Kagebein said. “We thought we’d go a little bit further in the playoffs. Our first goal is to be conference champs. Win it out. Hopefully we’ll go big in the playoffs, too.”


Kagebein broke his leg in the Panthers’ final game last year at Salem.


“It was right before the half ended. That was pretty terrible. I was devastated,” Kagebein said.


The senior came back from the injury even stronger, and has been a leader for Bigelow primarily at the nose position on defense.


Kagebein is a unique student-athlete whose influence reaches all throughout Bigelow High School.


“Bret has a 4.0 GPA and tutors others in math and science,” Starks said. “He is active in most clubs and also performs with the band at halftime.”


The Panther plays tenor sax, sings in a small band, enjoys Quiz Bowl and participates in track. The guy pretty much does it all.


While there’s a lot on the line this Friday, Kagebein is taking it all in stride.


“I kind of just try to think of it as any other game and do the best I can.”