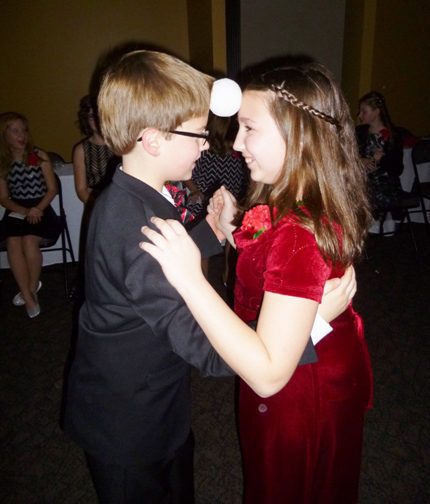 The Conway chapter of the National League of Junior Cotillions recently held its annual Holly Ball at the Brewer-Hegeman Center at the University of Central Arkansas.


The ballroom was decorated with lighted garlands and topiaries, and silver and gold metallic bows.


The Holly Ball gave Cotillion members an opportunity to put into practice all the dances and etiquette that they learned during the past half year in Cotillion classes. They danced the night away doing the foxtrot, cha cha cha, swing and the Cupid Shuffle.


"The members and parents, as well as the director, all had a great time!" said director Susan Humphries.


"It’s designed to train students in the courtesies that make life more pleasant for them and those around them," said Humphries. “In just the three classes for this year, I have seen these ladies and gentlemen grow in poise and self-assurance. And our second year students are becoming very mature ladies and gentlemen."


Membership is open to any interested student in the county. For information or to get your child on the list for the 2015-2016 Cotillion program, call Humphries at 501.262.5054.