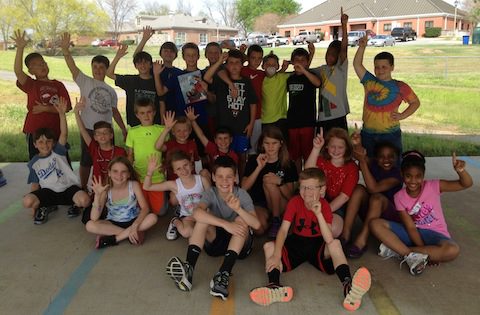 The 1 p.m. timed event will mark the achievement of a goal and, organizers, hope, the beginning of a lifetime of fitness habits.


"That’s what we’re hoping," said Mary Swindle, one of the parent volunteers. "We’ve asked them to set a goal for themselves to have something to work toward."


Swindle’s son Cade is a fourth-grader at the school, as are twins Jack and Benton Moss, whose mother, Kristie, is also an organizer. All three boys will be running the race.


The school’s running program had previously consisted of turning loose the K-4 student body for a few minutes before or after school.


"That is a very positive thing, just getting them out of the cafeteria and running, but we wanted to teach them that they can make running a lifestyle, including running in all these races, starting now," Moss said.


She and Swindle were happy for the opportunity to help lead the program.


"We both have a love and passion for the sport, so we jumped on it," she said. "After a few times, we decided that these kids needed a goal."


Thus, the idea for the Stallion 5K was born.


Moss and Swindle narrowed their focus to third- and fourth-graders who chose to be more serious about running. While other volunteers are handling the less-structured freestyle period for the younger children, they began training their charges Nov. 1. Since then, they’ve met Tuesdays and Thursdays for 30 minutes after school for the training program and have lost, unbelievably, just one runner.


"They have to commit," Moss said. "We’ve had major retention. We’ve been blessed."


Training has been on the school’s track, a non-regulation size on which six laps equal one mile.


Training started with a run-walk program. Drills have included speed and cross-training work, as well as "stick runs" in which students collect a stick for each lap they run. The next time, they try to collect one more stick during their timed activity.


"We’ve tried to change it up here and there and make it fun," Moss said. "Now, all these kids can run 30 minutes without stopping. They have exceeded our expectations, and we are so proud of them.


"Some of these kids have run before and have run races. Some will finish (the 5K) in well under 30 minutes, probably the low 20s, and some will take longer than 30 minutes.


"But the goal is just to finish."


The course for the Stallion 5K will begin and end at the school’s track. It will go down College and wind through Westin Park. Police will help with traffic control; Mark Lewis, the school principal, and Dr. Keisha Garland, assistant principal, will run with the group, as will some parent volunteers. The University of Central Arkansas track team and Conway Running Club will also help. Jeff Matthews of B98.5 in Little Rock will emcee the festivities; other volunteers will cover the course to ensure that no one gets lost.


"We’ve asked them to set goals," Moore said of the students. "Some will be to beat their last time, and some will be to finish. One boy’s goal is to beat my time in my last race, which I think is great."


Swindle and Moss said Marguerite Vann Elementary does a similar race. They hope the Stallion 5K catches on beyond their school.


"It would be fabulous for all the schools to do it," Swindle said.


It’s already been a positive for Jim Stone Elementary.


“Thanks to Kristie and Mary, this has been a huge success for our school,” Lewis said. “They have worked as ambassadors for our school throughout the community to access resources to make this a powerful culminating activity for our kids and staff. We are truly blessed to have such phenomenal moms.”