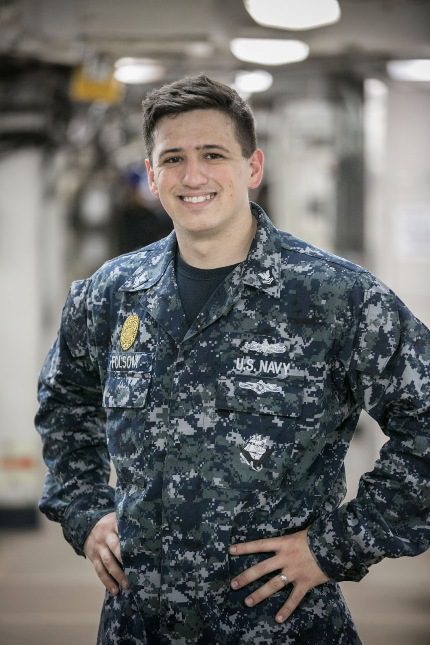 A 2008 Jacksonville High School graduate and is serving in Japan in the U.S. Navy aboard the only forward deployed amphibious assault ship, USS Bonhomme Richard.


Petty Officer 2nd Class Christopher Folsom is a master-at-arms aboard the Wasp-class amphibious assault ship operating out of Sasebo, Japan. A Navy master-at-arms is responsible for training the ship’s defense personnel and ensuring security both on and off the ship.


“What I like best about my job is the interaction with the ship’s sailors, because as security experts we’re looked to for our leadership,” said Folsom.


Bonhomme Richard is equipped with a mix of helicopters and attack aircraft, launchers and machine guns and an extensive medical facility with 600 hospital beds.


"The sailors in my crew never cease to amaze me with the effort they put into their daily work,” said Capt. Jeffrey A. Ward, commanding officer of USS Bonhomme Richard. “Their dedication and hard work make me proud to be in command of Bonhomme Richard and this crew.”


According to Navy officials, Bonhomme Richard sailors work rigorous hours filled with drills and training to assure that the ship is always mission-ready.


“Forward deployed means always being on the go and on top of our game, as we are essentially the peacekeepers in the region and are there to keep check,” said Folsom.


Navy officials explained that the unit is highly motivated, and quickly adapts to changing conditions including a busy life of specialized work, watches and drills.


“Serving in the Navy means serving my country, something I’ve wanted to do ever since I was in high school,” added Folsom.