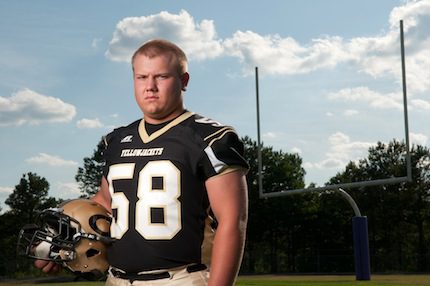 
The Clinton and Heber Springs rivalry is the premier rivalry in the 2-4A, and this week’s matchup includes an interesting rivalry within a rivalry as two 501 Football Team honorees are set to square off.

Dalton Jackson and the Yellow Jackets (2-6, 1-4) aren’t having quite the season they had hoped for, but a win over Heber Springs would certainly change the mood in Clinton.


“Heber Springs has always been our rival,” Jackson said. “They always give us a run for our money. The games against them are always fun and intense.”


Jackson is a member of the 2012 501 Football Team — 20 players representing all 11 counties in the 501. The team boasts the best the 501 has to offer both on and off the field. He was nominated for the team by his coach, Chris Dufrene.


“Dalton is a good student and hard worker in the classroom,” Dufrene said. “He’s a good leader and always works hard. He’s a three-year starter for us at offensive guard, and he’s a good blocker.”


Jackson’s presence on the offensive line is indispensible to the Yellow Jackets.


“Last year he helped lead our team to an 8-4 record and served on an offensive line that produced 3,000 rushing yards and a 1,000-yard passer,” Dufrene said.


Jackson’s prowess on the field doesn’t end on the offensive side of the ball. He also helps the team on defense at linebacker.

“I just love to hit people,” Jackson said. “It’s just an adrenaline rush. I just love the game. I want to lead the team in tackles and get more than 100 tackles at linebacker.”


Jackson admires two of the best linebackers in the NFL and strives to model their fervor of play.


“Ray Lewis and James Harrison — they both are just hard-hitting, hard-nosed guys,” Jackson said. “They really know the game of football.”


Jackson strives to play with the same ferocity, but he always maintains control on the field.


“Dalton wants to win, but within the rules of the game,” Dufrene said. “He’s a good role model for younger players and younger siblings.”


Jackson is a multi-sport athlete at Clinton. He helped the baseball team reach the state playoffs last year with an all-conference performance at first base. He’s a member of Fellowship of Christian Athletes, Future Farmers of America and Bible Club, and he is actively involved in the youth group at Clinton First Baptist Church. When he’s not busy in the classroom, on the field or in one of his extracurricular groups, he just wants to be outside in the 501.


“I just love always being outdoors,” Jackson said. “I love to go out on the lake or just be outside playing something.”