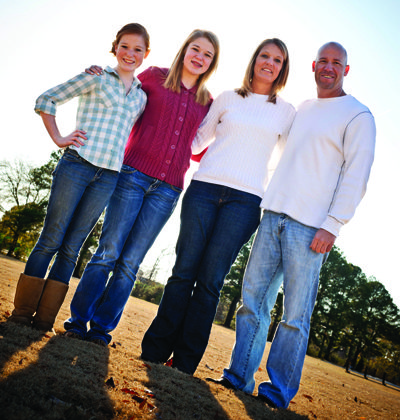 For a few more months anyway, in Searcy, the Giboneys are the volleyball family.

Keith, 42, was the volleyball coach at Harding University for 13 seasons before his contract wasn’t renewed following this season. He led the Lady Bisons to seven Gulf South Conference West Division championships, the overall GSC title in 2003 and four NCAA Division II Regionals. This fall, they finished runner-up to Arkansas Tech in the inaugural Great American Conference Tournament Championship.

Michal, 39, assisted her husband at Harding University. But she also started the volleyball program at Harding Academy, the high school associated with the university, and in just the Lady Wildcats’ second season of varsity competition this fall, she led Harding Academy to the Class 3A state championship.

Their older daughter, Emily, was a junior on that team. Both Emily and her younger sister, Abbey, have played club volleyball for several years.

About the only thing missing for the family this season was an NCAA Tournament appearance.

“That’s the only thing that would’ve made it better,” Michal said.

And while they don’t know where they’ll land next, it’s a sure bet volleyball will be a large part of their lives.

Michal played four seasons of volleyball at Lubbock Christian University, setting the career digs record and earning academic All-America honors. Keith was a year ahead of her at LCU, where both were studying to become teachers and coaches.

Their first meeting was — where else? — an intramural volleyball match. She was officiating; he was a student worker.

While they were dating, he wanted to learn more about her sport.

“I’d watched volleyball and knew something about it, but when we started dating, I couldn’t watch her without peppering her with questions,” he said.

Michal said he was like a sponge soaking up information — particularly strategy — about the sport.

“It didn’t take long for him to become very knowledgeable and know more about it than I did, strategy, philosophy, things like that,” she said.

The knowledge came in handy after Keith graduated. Lubbock Christian High School — like Harding Academy, associated with the nearby university — needed a varsity head volleyball coach.

“One of their questions was, ‘Do you know anything about volleyball?’” he remembered. “I said, ‘A little,’ and saying that was good enough for them. A week later, I was the head volleyball coach.”

Meanwhile, Michal’s first job was in public school, where she started the volleyball program at Lubbock Cooper. After a year there, she joined her husband at Lubbock Christian for three years, coaching basketball. Two years after they married, Emily was born.

“We decided it would be best if we coached alternating sports, so during volleyball season, I was the primary caregiver; during basketball season, it was him, and during baseball it was me again,” she said.

After four years for Keith (three for Michal) at Lubbock Christian, where he built a 110-25 volleyball record, the family moved to Dallas Christian, where Keith won his fourth consecutive Texas private school state volleyball title and in two years took his teams to a 60-18 mark. That’s when Harding University contacted him about its opening.

In 13 seasons, Keith led the Lady Bisons to a 337-122 record, including 25-8 this fall. They reached the postseason the last 14 years. In the last 10 years, Harding and Tech have battled for the top two spots in the conference standings, with Harding winning seven and Tech three. He was named GSC Coach of the Year five times.

Harding officials informed him the week after Thanksgiving that he would not be retained, although his contract through the end of the academic year will be honored. According to a press release on the Harding website, Athletic Director Greg Harnden said: “We believe that this move is in the best interest of our volleyball program.” He declined to comment on personnel issues, citing Harding policy.

After their move to the 501, Michal stayed home with Abbey for two years, then taught at McRae for three before going to Harding Academy to teach math in 2004. There was no talk of starting volleyball there then, and she began assisting her husband at the university.

But four years ago, Harding Academy started volleyball at the junior high level. Michal was the obvious choice to start the Harding Academy program. Varsity play began in 2010. In their inaugural run through the 3A-Central conference, the Lady Wildcats finished 12-2, losing only to Conway St. Joseph, which played in the state final in 2009 and ’10, en route to a state quarterfinal finish.

This season, they went 33-2 and beat Mansfield, the 2009 state champion, in the state final at Conway High’s Buzz Bolding Arena.

“It has definitely been overwhelming,” Michal said two days after their triumph. “I can’t give the girls enough credit. They’re an awesome group. They are just good competitors; they work hard and do whatever I ask them to do, and they just have a will to win.

“I think winning breeds winning. They had success last year in their first true season and just built on that.”

“Well, that was so fun,” she said, chuckling. “You can’t put that into words.”

“It was also a few years of work coming to fruition,” he said. “That was really neat. We’d seen all along the potential was there, but for them to do that in such a short time, it was neat.”

Michal continued to assist her husband with the Lady Bisons despite her duties at Harding Academy.

“There’s been a lot of give and take,” she said. “He’s been great because this is good for our kids; it’s hard because he has a lot more to do at the university, and I’m able to help him less.”

The day after the Lady Bisons’ season ended, the family was on the road to Jonesboro for club tryouts for their daughters. As Keith said, volleyball never really ends for this family. It’s just what they do.

He said for several years, the foursome had a tradition of going to Daylight Donuts in Searcy before school on Fridays. During those visits, a group of coffee drinkers christened them “the volleyball family.”