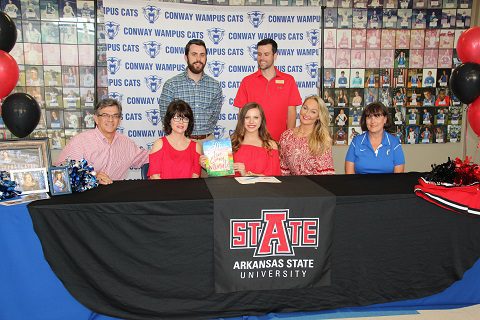 25 Jul ‘I just always wanted to be a cheerleader’


Conway High School graduate Abby Baker will soon be living her dream as a college cheerleader.


During a ceremony last spring at Buzz Bolding Arena, Abby signed a national letter of intent to cheer at Arkansas State University. Conway High officials were not certain but it is believed that Abby may be the first CHS student to sign to cheer on the college level.

“I felt so blessed to have family and friends around me to make it official as an Arkansas State cheerleader,” she said. “I felt very loved.”


The signing ceremony represented the culmination of many years of hard work, practices and time perfecting her sport.


Abby, a highest honor grad from Conway High, thought about staying closer to home to attend college but a visit to the Jonesboro campus changed her mind. “I ended up just falling in love with it.” Her roommate will be fellow CHS senior Megan Gunnels, who signed to be on the ASU dance team.


Abby’s interest in cheerleading, in particular on the college level, was sparked early when she attended basketball games at the University of Central Arkansas. “I always idolized cheerleaders and looked up to them.”


Participating first in the Upward cheerleading program, Abby began competitive cheering at age 8 with Cheer Force Arkansas. While she tried basketball and softball, her interest was elsewhere. “I just always wanted to be a cheerleader,” she said, adding that she thinks her outgoing and energetic personality are a good fit with the sport.


“I always wanted to cheer in college but it didn’t seem possible,” Abby said. “It was more like a dream than a goal.” The possibility became real when her tumbling coach asked what colleges she was trying out for. “That was the moment. I realized I needed to make it a goal and start working toward those tryouts.”


Her opportunity to try out at ASU came in April and was held over four days. About 50 attended tryouts in hopes of a landing a spot on the 24-member all-girls squad or 16-member coed team.


Already accepted to the Honors College at ASU prior to tryouts, Abby plans to pursue a career in occupational therapy. Her interest in the field was sparked when her close friend, Morgan McAlexander, suffered a traumatic brain injury in a car accident and later died.


The two attended First Church of the Nazarene. Abby said her faith has always been important to her, especially when she has faced difficult times, including the loss of her friend. “I’ve learned how to trust God in those times,” she said. “God has never failed me before.” Morgan’s parents were among those at Abby’s signing.


Her faith also helped Abby with her approach to the college tryout. “If it wasn’t God’s plan, I prayed I’d be content,” she said. “He’s made that opportunity available to me and hopefully I can glorify him through it.”


Through it all, Abby has had the support of family, especially her parents, George and Susan Baker, and her brothers, Dustin and Chris, who have attended games and cheer competitions. In fact, Abby left ASU during tryouts to attend her senior prom and her parents drove her back to Jonesboro early the next morning so she could continue to pursue her dream.


Abby recognizes that college cheerleading will be a lot of work and a big commitment. “I know it’s not easy but when it’s not easy, that’s when you grow the most,” she said. “I’ve grown a lot in Conway but I’m ready to immerse myself in a new city and in college and see how I’m going to grow through it.”