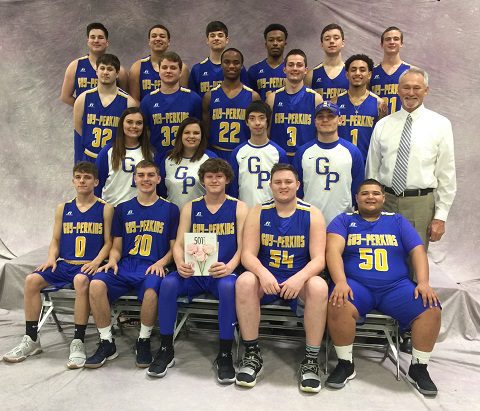 
Trailing by 12 points in the second quarter, the Guy-Perkins Thunderbirds rallied for a 71-66 win over Izard County, closing out John Hutchcraft’s legendary coaching career with an 11th state title.


“It was one of the best wins of my career,” Hutchcraft said. “I could tell my boys were playing extra hard for me on my last game. This state tournament win will always be one of my greatest memories.”

Entering the fourth quarter, Guy-Perkins trailed by two points. The teams exchanged leads until seniors Carson Petruccelli and Tre Minton took over with 3:40 remaining in the game. The seniors combined for 10 of Guy-Perkins’ last 12 points down the stretch, taking the lead and never surrendering it.


Petruccelli led the Thunderbirds with 24 points. Three other starters finished in double figures. Senior Wyatt Spires posted 16 points and 21 rebounds (more than half of the team’s 40 total rebounds), senior Brooks Tipton put up 13 points and Minton finished with 10. Ambrose Rodriguez, Guy-Perkins’ fifth starter, hit two 3-pointers in the first quarter to help the Thunderbirds get started.


“All my players had a good game, especially in the second half,” Hutchcraft said. “They all have certain jobs to do, and they did it. It was a great team effort. They played good defense, and all five starters can score.”


Izard County came out hot, putting up 26 points in the first quarter. Guy-Perkins keyed its comeback in the second quarter, outscoring Izard County 18-11. In the second half, free throws proved to be the difference. The Thunderbirds were 9-of-12 at the line in the fourth quarter. Izard County didn’t get to the line one time in the fourth quarter. Overall, Guy-Perkins attempted 12 more free throws than the Cougars, and made twice as many (14).


“Tre Minton and Brooks Tipton made crucial free throws toward the end of the game,” Hutchcraft said. “I feel like our team plays their best game in the second half and especially in the fourth quarter.”


As is usually the case for Hutchcraft, his championships tend to be a family affair. This year was no different as his grandson, Wyatt Spires, won his second-straight championship.


“I would say two of Wyatt’s biggest games have been during the state tournament finals,” Hutchcraft said. “He had a big game last year as well, and he broke the rebounding record for the state tournament this year. It was really something special. My daughter, Coach Ashley Nance, was also coaching the Conway Lady Cats in the 7A girls’ championship. Coaching my three kids and now my grandson has been the highlight of my career.”


And to top it all off, his final win came on his birthday.


Hutchcraft will retire from coaching high school basketball with 2,014 wins and 11 state championships (six boys’ titles and five girls’ titles). What will probably come as no surprise to anyone, Hutchcraft doesn’t plan to slow down in retirement, and basketball is still in his future.


“I own an auction business, so I will stay busy with that,” Hutchcraft said. “I plan to play more basketball with the [Team USA 60s] men’s team and travel. I may not hang the whistle up just yet. I did have someone suggest I take up refereeing. Who knows that may be an option?


“I’m looking forward to being able to follow and support Ashley and her team. Of course, I’ll always follow the Guy-Perkins Thunderbirds. It will be a little different sitting in the stands instead of coaching from the sidelines. I also look forward to doing a lot more fishing and hunting.”