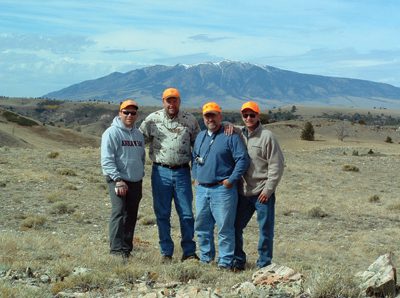 Have you ever been on a trip or had an experience with friends that earned you a nickname? Every year as hunting season rolls around, I’m reminded and happily reminisce about just such a trip.

I had never hunted outside of our beautiful state before when Wayne, a family and even closer friend, asked me if I would be interested in a trip to Wyoming. After the adrenaline stopped pumping and we talked about how inexpensive the trip could be, I decided I was in. We both immediately knew who else we should include and invited friends Don and Steven to round out our foursome.

This would be a new experience for all of us, and because we’re all as cheap as dirt, we started plotting just how to pull this off without selling body parts to finance the trip. Some folks hire expensive guides, hunt within high fences and stay in first class lodges with three hot meals a day. That’s way too easy. We decided to rough it and get the full experience of the Wild West.  Imagine if you will a Ford F-250 pulling a 28-foot fifth wheel camper pulling a 16-foot utility trailer loaded with 4-wheelers and gear. That’s right, we were our own wagon train to Wyoming – an amazing 62 feet from bumper to tail lights. What a sight it was. Yep, we had now become those people we like to make fun of.

We felt really out of place as each passerby on the interstate would gawk at us and point. The occasional head shaker would also stare us down with that look of bewildered disbelief.

Against my better judgment, I was driving this rig through Oklahoma worried about my new 4-wheeler, which I couldn’t see behind the camper almost 60 feet to the rear. I should have been paying more attention to the gas gauge. As we approached the outskirts of Stillwater, I realized I had almost depleted our fuel supply as the rest of the crew slept. After pulling us into a spot that required backing up, I was in even higher on the poop list. Have you ever tried backing two trailers at once?

Twenty-four hours after beginning this journey, we finally reached Rock River, Wyo., and found a campsite near a dry reservoir basin in the middle of nowhere. It was so far out that people who live in the area have to drive their kids 30 minutes on gravel roads just to catch the school bus. I joke with my daughters that if I don’t like a future boyfriend, I know where a body can be buried and never found. It’s that far out. I think they know I’m kidding.

My friend Steven also earned a name of his own on this trip. Late one afternoon he and Wayne were hunting together and found antelope grazing a little out of range. Let me clarify what “a little out of range” means when antelope hunting. We all sighted our rifles to 400 yards before we left, and the closest good shot any of us had up to this point was mine at 238 yards.

Steven waited until his target was at about 300 yards and with no signs of it getting closer he sighted in and pulled the trigger. He hit it, but just barely. An antelope can sprint up to 60 mph and sustain speeds up to 30 mph.

Tracking one of these critters is not an easy undertaking. After shooting through a full box of 20 shells at this lone antelope, Steven had to ask Wayne to ride his 4-wheeler back to camp for another box while he continued to track and torment this animal.

Twenty rounds through a high-power rifle can wear a man out, but he wasn’t done yet. When Wayne returned to the scene, they continued the search. Several hours and many shots later, the animal was finally presenting itself for what should be an easy kill. Oh yeah! I guess it was too late for that.

Steven was so exhausted at that point that he couldn’t hold his gun steady, so Wayne made the ultimate sacrifice that only a hunting buddy could understand. The terrain was so desolate that there was nothing to rest your gun on when you shot. Wayne belly-crawled on the ground in front of Steven, lying across his shooting lane and uttered four words he will never be allowed to forget. Knowing Steven needed a shooting rest, he said, “Here, use my butt.”

After a total of 33 shots, the antelope was finally down and now hangs on Steven’s wall. It’s finally at rest, and Steven will forever be known as “Ole 33.”

There are so many stories from this trip that will keep our group close for the rest of our lives.  What was an unlikely bunch of guys when this journey began are now the best of friends. This adventure became about so much more than the animals we hunted.