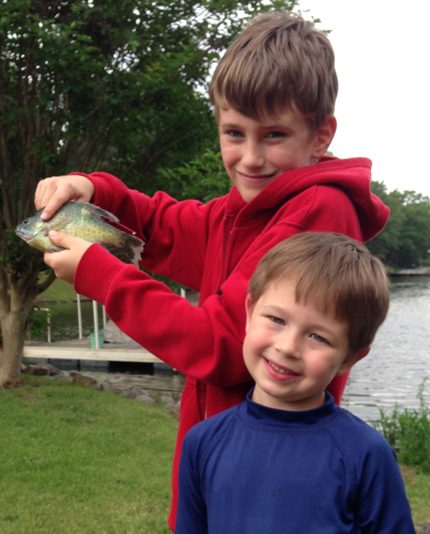 Nine-year-old Liam Stockwell of Hot Springs knew exactly what he’d accomplished earlier this month when he caught a $500 bluegill in the 2015 $86,000 Hot Springs Fishing Challenge.

Stockwell, the son of Elizabeth Ledbetter, was fishing with his 4-year-old brother, Noah, from the dock at their house on Marion Anderson Road on Lake Hamilton. They were using red worms for bait. Stockwell’s mother said he was aware of the Fishing Challenge and realized as soon as he saw the tag on the bluegill that he’d won something.


His prize fish was the fifth one caught in this year’s Fishing Challenge.


The Fourth Annual $86,000 Hot Springs Fishing Challenge began May 1, on Lake Hamilton and Lake Catherine, and is even sweeter this year.


“We are going to make it even easier for fishing fans to land a money fish this year,” said Steve Arrison, CEO of Visit Hot Springs. “We are adding 11 more $1,000 fish to the 35 $1,000 fish we already planned to release.


“Plus, and here’s the really sweet part, we will tell you where the extra fish are being released.”


Arrison said, “Every Tuesday until July 21, we will put a bonus fish worth $1,000 into Lake Hamilton or Lake Catherine. Then we will reveal on Facebook and Twitter — and later on Tom Duke’s 12:20 p.m. Fishing Report on US 97 FM — not only where the fish was released but also what kind of fish it is.


“If anglers can’t land one of the extra fish, it won’t be because we don’t give them all the assistance they can possibly need.”


The 11 extra $1,000 fish will be in addition to the 60 prize fish that were put into the lakes April 30 by the Arkansas Game and Fish Commission.


The bonus fish will bring the total prize money in this year’s to $86,000, Arrison said.


That total includes Big Al, the elusive $10,000 fish that has avoided being caught the first three years of the Fishing Challenge, he said. “Big Al has become a bit arrogant after eluding the best lures that anglers have thrown at him in the last three years,” Arrison said.


He’s worth $10,000 in cool cash to the person who manages to wrangle him to shore before Friday, July 31. “We’re not telling anyone where Big Al was released on April 30. Nor will we reveal what kind of fish Big Al is,” Arrison said. “There’s got to be some challenge in the Fishing Challenge.”


Big Al is the name given to a fish, could be a largemouth bass or one of five other species, bearing the lucky 2015 red tag. “Hot Springs residents and visitors coming to Hot Springs from throughout the nation have told us this is their favorite time of year,” Arrison said. “Many people have told us they had an exciting time on the lakes trying to land one of the prize fish, even if they haven’t yet hit the cash jackpot.


“Once again, we are partnering with our friends at the Arkansas Game and Fish Commission and the Andrew Hulsey Fish Hatchery to bring this fun-filled contest to the people of Arkansas and our visitors. They select and tag the prize fish for us and they supervise the release of the fish into the lakes. Without them we could not possibly stage the Challenge.