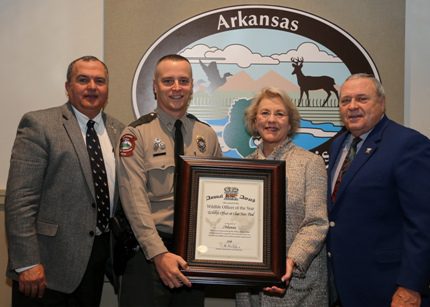 
On the enforcement side of things, Officer Paul maintains a 100 percent conviction rate in wildlife law enforcement as well as state law enforcement. He has handled criminal cases ranging from felony drug arrests and kidnapping to commercial burglary and aggravated assault. His wildlife law enforcement accomplishments last year alone included 140 citations, with an astounding 23 of those being night hunting cases. Some of his most notable contacts with hunters this year include patrolling the newly developed Jack Mountain Wildlife Management Area using a mountain bike to not only approach possible violators quietly, but also to work the area without disturbing law-abiding hunters.


Paul not only continues his training, but also works to train other wildlife officers and first responders in critical issues. He served as a committee member for the Arkansas Fireboat School, the largest fireboat training event in the Southeast. He oversaw swift-water rescue training and coordinated the “true to life” scenarios attendees of the school would face.


Paul also has done an outstanding job of reaching out to the community, participating in fishing derbies, television segments, special Wounded Warriors hunts for disabled veterans and many school programs to help educate youth in his area about conservation issues. He also regularly volunteers in a job-shadowing program for Malvern Middle School.