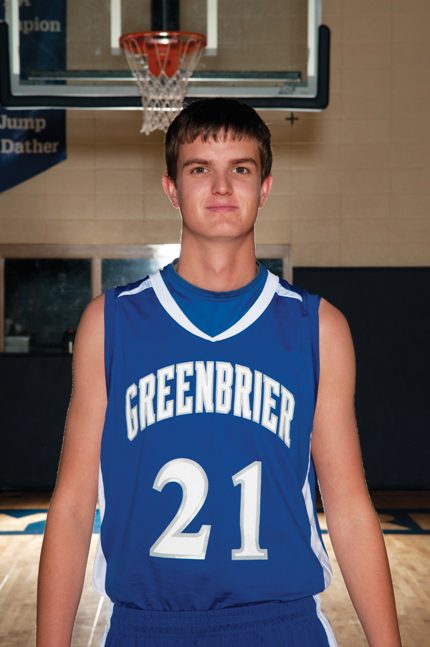 
Like a comic book superhero, when someone in Greenbrier needs help, Panthers senior Logan Horvath is there to the rescue.

And on the basketball court, the 6-foot-5 center helps out in a big way.


Horvath was nominated and selected to the inaugural 501 Basketball Team, which is made up of male and female student-athletes honored for their on- and off-the-court accomplishments and contributions. His coach, Mike Simmons, nominated him.


“Logan has a huge heart and is never selfish,” Simmons said. “He always goes the extra mile when helping others. He truly cares about people.”


With the end of the regular season drawing near, the Panthers are still in the hunt for a spot in the conference tournament, but will need to step their game up in the coming weeks.


“We just want to come together as a team and play team ball,” Horvath said. “I just want to help my team win and make it to the state championship.”


“Logan’s best quality is that he puts the team first,” Simmons said. “He is unselfish, plays good defense, understands the game and works hard.”


The fate of the Panthers could rest on an important rivalry game when Greenbrier travels to Vilonia on Tuesday, Feb. 25.


Basketball is a family affair for the Horvath clan. Originally from Kentucky, Horvath grew up watching the Wildcats dominate the court.


“My favorite team has always been Kentucky,” Horvath said. “That’s where we were from. I’ve had a love for the game since the first grade. My whole family has played basketball. My two older brothers played, and my dad used to play.”


In all his years on the court, Horvath says his favorite memories are the ones that involve the friends he’s made since moving to the 501.


“My favorite memory is playing summer ball with some of my close friends,” Horvath said. “We have always played summer ball since the seventh grade. We’ve been together ever since.”


“Off the court, [Horvath] works very hard to represent Greenbrier basketball,” Simmons said. “He is honest and hardworking. He is always going to school early and will meet with teachers so that his grades never fall, and he will offer to help others with homework or projects.”


While balancing academics and athletics can be tough, Horvath still makes time to give back to the community he calls home.


“Logan has been involved in the Greenbrier City League basketball program for the last two years,” Simmons said. “He gives up his Saturday mornings and weekends helping first- and second-graders learn the game. He is very patient and teaches them the little things.”


“I help with my little brother’s baseball and basketball teams,” Horvath added. “I’m an assistant coach for the peewee team at Greenbrier and help out with whatever I can.”


With all the help he’s given to his friends, family, teammates, classmates and peers in Greenbrier, it’s no surprise that Horvath wants to pursue a career in helping others by pursuing a degree in physical therapy at the University of Central Arkansas.