Conway’s athletic history as well as its bright future were celebrated Jan. 25 at the Conway Athletic Awards Commission’s annual luncheon. 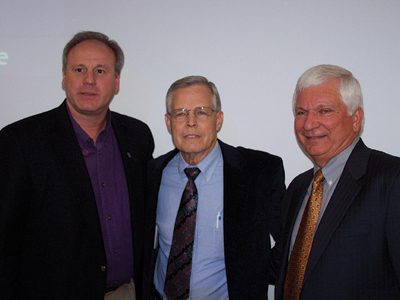 (More photos can be found under the LIFE Pics tab)

The event – held at the Brewer-Hegeman Conference Center at the University of Central Arkansas – honored students and other members of the Conway community involved in local athletics.
“We started these awards to celebrate the athletic history of Conway,” CAAC chairman David Grimes said, adding that they honor “the past, present and future.”
The CAAC started presenting the Elijah Pitts and Marvin Delph awards in 2000, the Delph Student-Athlete Awards in 2005 and the Joe B. McGee Award in 2007.
Grimes said when he approached Marvin Delph several years ago to name the sportsman of the year award after him, Delph accepted and insisted the CAAC create awards to “celebrate and promote the youth” in Conway as well.
Delph attended Conway High School and led the Wampus Cats to two basketball state championships. He was a member of the Arkansas Razorback “Triplets” during the 1970s, and he was inducted into the Arkansas Sports Hall of Fame in 1998.
The Marvin Delph Student-Athlete Awards are given to two eighth-grade students (one male and female) from each of the schools in Conway. This year’s recipients were McCall Wilkins and Brannon Sargent (Bob Courtway), Abby Mann and Tim Boyd (Carl Stuart), Morgan Kordsmeier and Drew Bates (St. Joseph) and Sarah Roberson and Caleb Crawley (Conway Christian).
The Marvin Delph Award for the Sportsman of 2008 was awarded to Nathan Brown. The UCA quarterback compiled a lengthy list of accomplishments during his tenure (2005-08) and was named the Southland Conference Player of the Year in 2008.
“[Brown] told me he is very humbled by this honor,” said UCA football coach Clint Conque, accepting the award on Brown’s behalf. Brown played in the Senior Bowl the night before the luncheon and was unable to attend.
“He is a top-shelf young man. We will miss the 100 touchdowns and the nearly 11,000 yards, but Nathan Brown transcends the football player. We hope to see more of him on the national level. I have no doubt that he will be successful and represent UCA and the Conway community [proudly].”
Jim Schneider received the Joe B. McGee Award for his service to Conway athletics.
He began his career as a reporter for the Log Cabin-Democrat at the age of 18, working under the guidance of McGee.

“McGee saw something in me,” Schneider said. “He saw and addressed my personal development, and the things I learned from him transcend the newspaper business. Not a day goes by that I don’t think of him.”
Bill Johnson – the first recipient of the McGee Award in 2007 – introduced Schneider as a “natural” writer who “played it straight.” Schneider became UCA’s first Sports Information Director in 1969.
Bobby Tiner received the Elijah Pitts Award, named after the Pine Street High School graduate who won five NFL titles with the Green Bay Packers. The award is given to honor career athletic achievements.
The former UCA quarterback (1963, 1965-67) led the Bears to two Arkansas Intercollegiate Conference titles in 1965 and 1966. He coached Pulaski Oak Grove to a state championship in 1979.
“You may not know this, but I was a Wonder Boy for a week,” Tiner said. “I had my locker and equipment at Arkansas Tech. On a Saturday morning, [UCA coach Raymond Bright] walked in to the grocery store I was working in and talked me into coming to Conway.
“Coach Bright accepted me, UCA accepted me and the great city of Conway accepted me. It’s the best town [in the USA], I guarantee you. Life’s been good to me.”
Tiner was inducted into the Arkansas Sports Hall of Fame in 1990 and the UCA Sports Hall of Fame in 2001.
Proceeds from the event were donated to former UCA receiver Kedrick “Che” Jones who is in need of a kidney transplant.