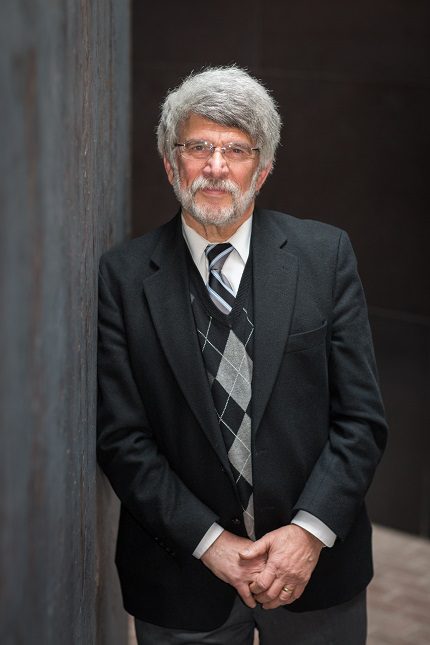 The University of Arkansas Community College at Morrilton, in cooperation with the United States Holocaust Memorial Museum (USHMM) in Washington, D.C., is honored to host Peter Gorog at the 10th annual Holocaust Survivor Series event at 6:30 p.m. Tuesday, March 6, in the Fine Arts Auditorium.


Gorog will speak again at 9:45 a.m. Wednesday, March 7, at Morrilton High School’s new Devil Dog Arena. The daytime program will be tailored for secondary school students in the six-county service area, but the public is invited to attend both free events.


Gorog — born Péter Grünwald on March 10, 1941, in Budapest — was only 3 months old when his father, Árpád, was taken to a forced labor camp in Hungary. He soon died in 1942 while in a labor battalion in the Ukraine. Gorog was then supported by his mother, Olga, a hat-maker.


When the German forces invaded Hungary in March 1944, the country’s government ordered the Jews of Budapest to move into “csillagos ház,” meaning “houses marked with a yellow Star of David.” Afraid the houses would bring even worse discrimination, Olga and her son found refuge with a Christian friend, but were turned over to the military by a neighbor soon after. The two were arrested and jailed, but managed to escape after only two days.


By October 1944, the Red Cross party had gained control of the Hungarian government, and began a reign of terror against the Jews of Budapest. Olga and her son fled to the city’s ghettos and lived with his grandparents, two aunts and a cousin — all packed into a one-bedroom apartment. But in January 1945, the country was liberated by the Soviet army. Though having survived the terrors of World War II, Gorog changed his name in 1962 from Grünwald for fear of any lingering anti-Semitic attitudes.


Gorog earned a master of science degree in electrical engineering and later participated in the design of the first Hungarian-made computer. He defected to the U.S. in 1980, where he worked on various NASA projects such as the Hubble and James Webb telescopes. Gorog, now retired, has five daughters and two granddaughters.


“We want to provide as many people in the region with the opportunity to hear from a survivor, to be enlightened as to how and why this happened, and to make sure that people never forget,” said Mary Clark, UACCM’s director of marketing and public relations. “It’s an honor and a privilege to host this event. We can study and read about the Holocaust, and watch documentaries and films about that dark time in world history, but nothing can compare to hearing these powerful stories firsthand.”


These events are funded by a Giving Tree Grant from the Conway County Community Foundation. UACCM also partners with the University of Central Arkansas in Conway to bring the survivors to Central Arkansas, sharing the cost of travel expenses for the survivor and a travel companion from the USHMM Office of Survivor Affairs. The survivors do not charge a speaking fee, and they donate thousands of hours of service annually to the Museum by doing speaking engagements across the country, providing tours and lectures at the Museum and participating in other special related activities.


The format of both events will be a stand-alone lecture with Gorog speaking about his experiences for 30-45 minutes followed by a question and answer session with the audience. For more information, contact Mary Clark at 501.977.2011 or [email protected] .