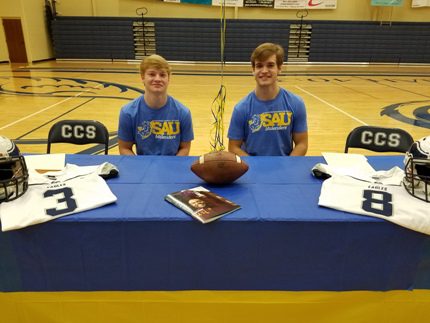 
Smith, who played receiver for the Eagles, also projects as a receiver at SAU.


“I really enjoyed my visit, and I was impressed with the coaches and football players at SAU,” Smith said.


Hogue, a linebacker at Conway Christian and a 501 Football Team honoree, will be used by the Muleriders at fullback and tight end.


“I never really knew much about SAU before and had never even been to Magnolia prior to my visit, but when I got to hear Coach (Bill) Keopple talk about their program, he seemed like a coach I would want to play for,” Hogue said. “He was fired up about their program and talked about how they have built a strong foundation. Things are looking up there, and he was passionate about everything even remotely related to SAU.


“You could tell he genuinely cared about the players and wanted your best each day, and the coaches he surrounded himself with were phenomenal. I could tell that not only just football was a priority, but also that they put an emphasis on the student in student-athlete.”


Hogue says deciding where to commit himself for college took deep reflection.


“The decision process was a long and strenuous one, and I didn’t get hardly any sleep,” he said. “I got to a point where I was barely eating because I was stressed about where I would play. After meeting with my Dad and coaches and praying about it a lot, I came to a decision and called up Coach Keopple and told him I wanted to play for them next fall. Playing college ball has been a dream of mine ever since I was 5 years old and playing backyard football. I know that SAU is the best fit for me to make that dream come true.”


Smith and Hogue were big time contributors to Conway Christian the last few years both on and off the field.


“I have known Rob since he was in seventh grade,” Coach Andrew Roberson said. “He has always been a vocal leader. He always does what he says he will on the field, in the classroom and most importantly, in his walk with Christ. If he continues as he does now, he will be successful in life.


“Seth is a great athlete who gives 100 percent at everything. His quickness and speed have been awesome attributes over the course of his football career.”


As the two Eagles move on to become Muleriders, they are both excited to be on the journey together.


“Playing college football has always been a dream of mine, and getting to play with a lifelong friend like Rob will only make the experience better,” Smith said.


“Having a fellow teammate come along with me is something that will make it a lot easier and more enjoyable,” Hogue said. “Having one of your best friends there in a huge transition in life, moving three hours from home in a town nothing like where you’ve grown up, is very helpful. Me and Seth have grown up together playing just about every sport whether we were on the same team or against each other.


“It will also help me having someone there to keep me accountable with my schoolwork, but to also push me when times get tough in practices. We’ve always shared this dream of playing at the next level, and it’s great that we get to achieve that dream together at the same school.”