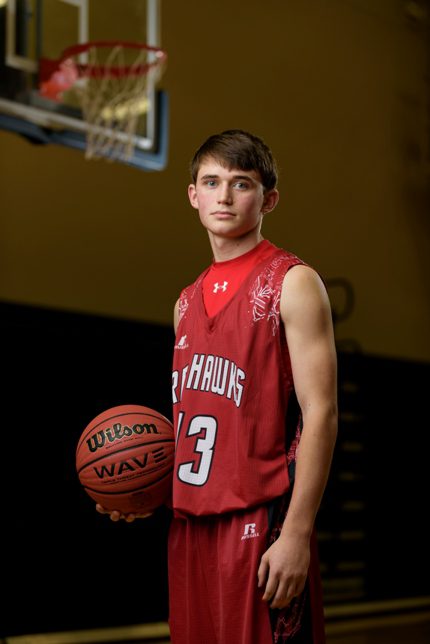 
It’s been a season of change for Ethan Hill and the Nemo Vista boys basketball program. Hill, a leader among the Red Hawks, has been eager to embrace and lead his teammates through new horizons.


“Last year, Ethan was the starting point guard for our team,” said Drew Blocker, Nemo Vista’s new head coach for the 2016-17 season. “During the offseason, Ethan re-evaluated his game and made adjustments to be a tougher player this year. With a coaching change, he has bought in and been a great leader for our team.


“He is encouraging and never gets down on his teammates. He makes other players better when he is on the floor.”


Hill, a junior guard for Nemo Vista, was selected to this year’s 501 Basketball Team — 34 players representing the best the 501 has to offer both on and off the court. The team is sponsored by First Security Bank and First Service Bank. Hill was nominated by Blocker.


“Ethan has high expectations every night,” Blocker wrote in his nomination. “He draws the best defender from the other team, guards the other team’s best player and is asked to create [opportunities] for his teammates. Ethan’s best qualities on the court are his vision, toughness and leadership.”


After a tough 1A-5 North loss Tuesday at St. Joseph, 50-47, the Red Hawks look to bounce back Friday at home against Conway Christian as they continue to prepare for post-season play.


“We want to win district, regionals and ultimately an elusive state title,” Hill said. “Our goal is to make a deep run in the state tournament.”


Hill’s first taste of a high school basketball season as a freshman included a district championship and state tournament appearance. The junior longs to help get his team back to state.


“It was a big deal to make it as a ninth-grader because it was a long time since the boys made it to the state tournament,” Hill said.


In addition to playing basketball at Nemo Vista, Hill also competes for the Red Hawks in golf. He’s an outdoorsman, and when he’s not playing sports, he can be found hunting or fishing with friends.


“Ethan is involved in many volunteer opportunities through the school,” Blocker said. “He is also a great example for the younger players in the program. Ethan is well liked and respected by the student body. His willingness to help makes him a great classmate.


“Ethan is a nice and courteous young man. He’s well-mannered and a hard worker in everything that he does. He is an all-around great young man.”