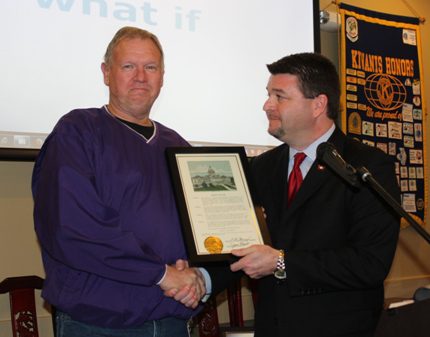 
Conway businessman Ron Hill was recognized Wednesday for his community service, including time spent volunteering to coach many local young people during the last 40 years.

The presentation was made during the weekly meeting of the Conway Kiwanis Club, where Hill is a member.


State Sen. Jason Rapert made the presentation, explaining that efforts are being revitalized to recognize local volunteers. “There was no question in my mind that he was an individual who should be recognized,” Rapert said of Hill’s nomination.


In describing Hill’s volunteerism, Rapert said, “It’s always been about something bigger than himself.”


Rapert presented Hill with a state Senate Citation. It stated that Hill is “well known in the area for his numerous and lasting contributions to the city of Conway and for the positive impact he has had on Faulkner County youth of all ages through his selfless volunteer efforts as a coach of multiple sports – from T-ball to high school teams – that has spanned over four decades.”


Rapert also noted that Hill taught Sunday school for kindergarten/first-graders at Grace United Methodist Church in Conway for many years. At Woodrow Cummins Elementary School, Hill donated his time and labor to help complete a playground. Hill also remains a supporter of the Purple Circle and Bearbackers Club at the University of Central Arkansas, where he attended.


Most recently, Hill has been involved in efforts to construct two landmark signs along Interstate 40, marking entrances into Conway. The signs “welcome visitors from all over the state and have become a source of pride to citizens and to the various clubs and organizations that made the project possible,” Rapert stated.


“In recognition of his past and ongoing volunteer efforts on behalf of the city of Conway and its youth, Sen. Rapert and fellow board members are happy to honor Ron Hill with a Community Service Award for the month of January 2014,” the citation stated.