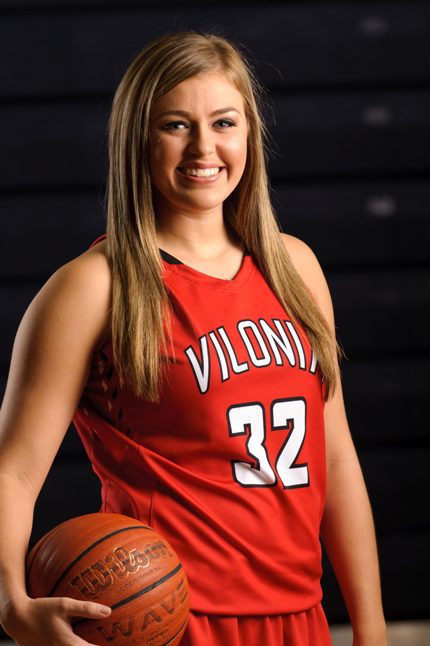 17 Feb Hightower eager to return to the court


The best laid plans of players and coaches often go awry — because of injury. For Abby Hightower, her junior campaign has been cut to its knees by the big injury beast.


Or, it may be more accurate to say ankles, rather than knees.


“I’ve only been able to play a few games this season due to two ankle injuries,” Hightower said. “My personal goal for this season is to overcome my ankle injuries and to continue to grow as a player and leader going into the state tournament.”


Hightower’s first injury occurred three games into the non-conference season and then re-occurred during the second 5A West conference game, but the junior is hopeful to be back on the floor for Vilonia come 5A state tournament play in March.


Hightower was selected to this year’s 501 Basketball Team — 35 players representing the best the 501 has to offer both on and off the court. She was nominated by her head coach, Alvin Riley.


“Her dedication and leadership to the game of basketball are her best qualities on the court,” Riley wrote in his nomination. “Off the court, she’s a good student and all around good person. Abby has leadership qualities and will do whatever is necessary for the team and her teammates. Abby sets a good example for others.”


Hightower has been playing basketball since she was in the first grade. She travelled to all the pee-wee tournaments that her older sister, Ashlyn, played in and “decided that was something I would want to do when I was old enough.”


As a junior, she’s an upperclassman for Vilonia, but her experience goes even deeper. She got her first taste of high school basketball after moving up in her freshman year.


“My favorite basketball memory was getting the opportunity to play as a ninth-grader in the high school state tournament in Alma’s beautiful, but overwhelming gym,” Hightower said. “My team goals for this season are the same as every year — work hard and continue to grow as a team and win a 5A state championship.”


At 15-7 overall and 9-1 in 5A West play, the Lady Eagles are primed to take the No. 1 seed out of the 5A West. Vilonia will be getting Hightower back at the perfect time, and the junior forward brings quite a bit to the table.


“Expectations for Abby are high,” Riley wrote in his nomination before the injuries. “She should be a leader on the floor. She is a well-rounded player that will be able to score, help bring the ball up against pressure and should be one of our leading rebounders.”


Spending more time on the sideline than on the court has been difficult for Hightower, but she says she’s gained a new respect for her teammates and coach during this time.
“While being out for an injury, I have been able to observe from a different perspective of how hard Coach Riley and the team work during practices and in games,” Hightower said. “It is definitely an eye opener.”


Hightower also plays volleyball, softball and track for the Vilonia Lady Eagles. When she’s not playing sports, she can be found hunting and fishing with her dad or hanging out with her friends.


The Lady Eagles continue their march to a 5A West crown at 6 p.m. Friday at Morrilton.