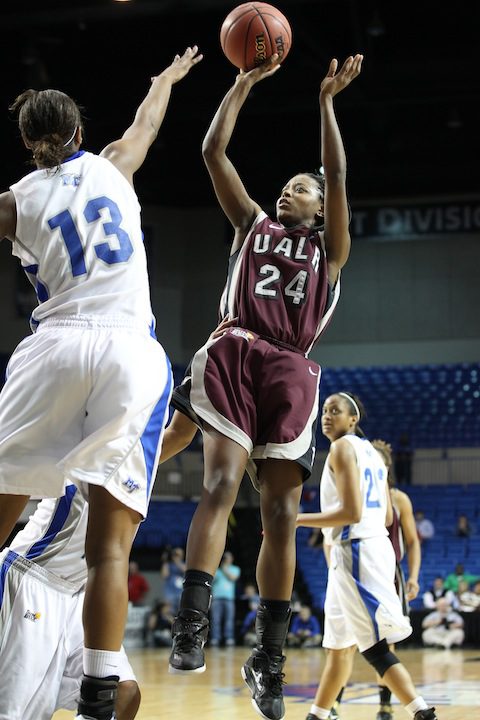 
Taylor Gault of Conway compiled a 3.6 GPA during her first semester at UALR last fall, but her learning didn’t stop at the classroom.


And along the way, she learned to play defense for Foley, who has a reputation as a taskmaster.


“In high school, I didn’t have to play defense,” Gault said. “All I did was shoot the ball.”


She arrived at UALR having averaged 18 points, eight rebounds, four assists and three steals for Conway, becoming a three-time all-conference and all-state player for the Lady Cats and an Arkansas High School All-Star.


But she readily admits she was behind on her defensive skills. 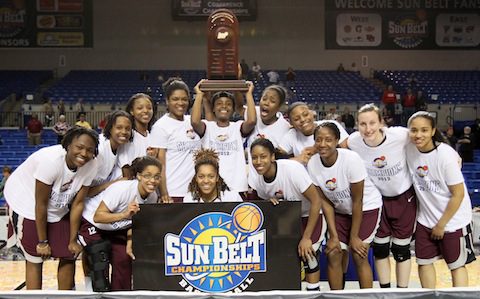 
Gault’s progress has gone beyond the individual. She was one of the key cogs that led the Trojans to their third consecutive berth in the NCAA Women’s Basketball Tournament. After winning the Sun Belt West Division and knocking off Middle Tennessee, which won the overall conference title, in overtime to win the Sun Belt Conference Tournament, the Trojans qualified for the NCAA Tournament with a 20-12 record.


They played host to Delaware in a first-round game March 18 at the Jack Stephens Center, thanks to Gault’s jumper to force overtime against Middle in the conference championship. UALR survived to earn the league’s automatic NCAA Tournament berth in overtime, 71-70.


While the team improved from a 4-9 start with a 16-3 run since Dec. 28, Gault’s improvement was also obvious.


How much better is she now than she was a year ago?


“Oh, a lot better because I’ve got some basketball I.Q.,” she said. “I’ve learned a whole lot. There were so many things I didn’t know before, and that’s kept me playing a lot better.”

Foley, a member of the Arkansas Sports Hall of Fame, knows a few things about the game, having won two NAIA national championships in 16 seasons at Arkansas Tech before coming to UALR, which had been one of the worst women’s programs in the country. In nine seasons there, he has won the last five Sun Belt West titles and led the Trojans to six consecutive 20-win seasons.


Gault said things clicked for the Trojans over the last few games of the conference schedule.


“We felt like we were all coming together,” she said. “We had a lot of chemistry.”


Her progress isn’t surprising to her former coaches at Conway High. Janet Taylor, who coached her during her sophomore and junior seasons, saw her talent and potential when Gault was in seventh grade.


“She just has so much God-given talent,” Taylor said. “I truly think she is only going to get better and better, and she’s just now maturing and starting to understand the game. Wow — is she fun to watch.”

“We are all extremely proud of the way she has represented her family, Conway High School and Coach Foley and the UALR Trojans,” she said. “Taylor has proven herself this year to be a remarkable basketball player and, more importantly, a mature young lady.”


Foley agreed that Gault would only get better.


“When she gets the fundamental aspects of defense down, she’s going to be a great defensive player, too,” he said. “She has the uncanny ability to anticipate where the ball’s going, and she’s made some big plays just on that natural ability.”


But natural ability didn’t prepare her for the stresses of playing for him.


“He’s so hard on us,” she said. “It was like really, really, really difficult. I struggled, got down, but then when I got adjusted, it was fine. I had to lea
rn how to play defense.


“It’s definitely been worth it.”


Heading into the NCAA Tournament, Gault averaged three rebounds per game and had recorded 56 steals, 51 assists and 24 blocks.


“She is learning — no doubt — to make those plays and keep us steady on defense,” Foley said. “She’s going to be a great player on both ends of the floor.”


And with a wink and a grin, he added: “I taught her everything she knows.”