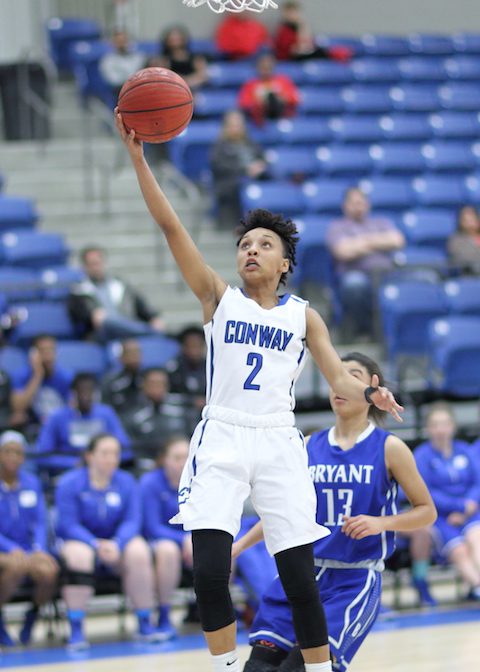 For basketball fans, March is the most wonderful time of the year.

This week marks the start of high school state tournaments across all seven classifications.

In the 7A, the Conway Lady Cats are one of the favorites to take home the crown. Conway earned the top seed out of the 7A Central and will take on the host Cabot Lady Panthers today at 4 p.m. after earning a first-round bye. The Lady Cats have been to back-to-back state championship games, winning the title in 2014.

“This is a really interesting coaching matchup,” said Jeff Matthews, play-by-play announcer for the Lady Cats on Conway Corp 5 Sports. “Ashley Nance is one of the brightest young coaches in the state. Carla Crowder has coached for 35 years and just won her 800th game last week. It’s been awhile since Conway has been tested. Conway plays well every where. Playing Cabot in Cabot’s gym shouldn’t intimidate them.

“Conway has taken everyone’s best shot all year. The key for Conway is defense, defense, defense. Alexis Tolefree will draw Cabot’s best defender, but that’s been the case all year long and she’s put up record numbers.”

Cabot senior Rachel Allgood and the Lady Panthers are coming off a first-round win over Springdale, 48-40.

“We fought hard to come back from being down,” Allgood said. “We never gave up and kept playing until the very end. Playing in front of our home crowd means a lot. It helps us to focus and want to play hard for the fans that come and support us. It also gives us confidence knowing many people are there to watch us and are supporting us.

“To beat Conway, we have to play well together and make sure that we play great defense. We really have to hit the boards hard and make sure we get the rebound.”

Conway is 28-1 on the season and finished 6A/7A Central play undefeated. The Lady Cats senior class has amassed 80 wins and has aspirations to get to 83, which would mean Conway would win its second championship in three years.

“We are definitely proud of our team for the way they performed during conference,” Coach Ashley Nance said. “We met at the beginning of the year and set team goals and winning conference was a goal that we set. We obviously don’t want it to be the only goal we accomplish this season.

“[The seniors] are one of the biggest reasons we are the program that we are today. When you think of Conway basketball [years from now], you will think about this group of young ladies.”

On the boys side in the 7A, the Cabot Panthers come off a bye to take on Springdale, who beat Conway in the first round, 50-40.

“We have to play team ball and lock down defense,” said Hunter Southerland, a 501 Basketball Team honoree for Cabot. “It means a lot to play in front of a home crowd. We get to play in our own gym and don’t have to stay in a hotel. We get to sleep in our own beds.”

On the girls side of the 5A, the Vilonia Lady Eagles — the top seed out of the 5A West — will play Greene County Tech Thursday at 7 p.m. in Hot Springs. Vilonia beat Jacksonville Tuesday, 45-31.

“We kept working hard to get girls open by setting screens and moving the ball around quick to get open shots,” said Abby Hightower, a 501 Basketball Team honoree for Vilonia. “Not all of our outside shots were falling, so we had to go into the paint to score. We watched Greene County Tech play Wednesday, and we will have to have a great defensive game and pray our open shots are falling. It all comes down to how bad we want it and always fighting for one more game this season. They are a great team.”

In the 5A, the Maumelle Hornets are still alive and set to take on Magnolia in the quarterfinals Thursday at 8:30. Maumelle beat Jacksonville, 81-73, on Tuesday.

“Our team has a lot of heart,” said De’Shawn Williams, a 501 Basketball Team honoree for Maumelle. “Everyone on the team understands to win they have to play their role to the fullest. Tremont Robinson and I understand we got to both perform every night as a one-two punch.

“To make it to the semi-finals we just have to continue to play hard and stick to what got us on this win streak we’re on now. We don’t want to change anything up and continue to be dogs on the court and don’t back down.”

“We executed our game plan,” said Alex Francis, a 501 Basketball Team honoree for the Wildcats. “Defensively we rebounded well and defended their athletes. Offensively we worked to get good shots on most possessions. When you get to the state tournament it can sometimes rattle teams, but I thought we did a good job of being poised and calm.

“We need to keep looking for good shots offensively and then defensively we need to contain Magnolia’s shooters and get on the boards. We are looking forward to one more game with each other and competing like crazy."