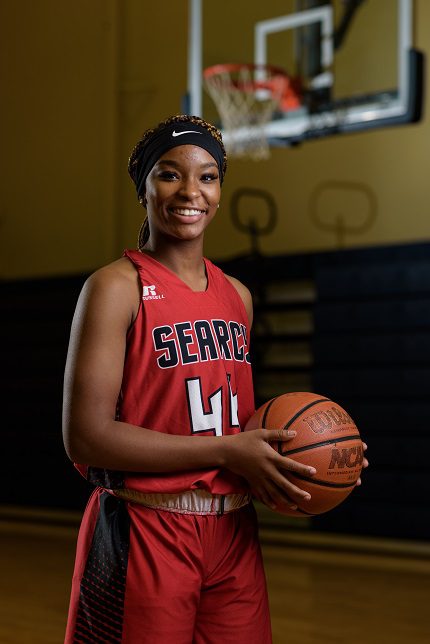 
Sometimes, the greatest character moments are revealed in times of adversity rather than times of triumph. During a challenging senior basketball season, Searcy’s Sydney Hicks has learned a valuable virtue.


“I’ve learned many things on and off the court, but above all, I have learned patience,” Hicks said. “On the court, I work to continue to be mentally strong no matter what the scoreboard says so that I can be the leader offensively that my team needs me to be.”


Hicks, a senior guard for Searcy (3-13, 0-1), was selected to this year’s 501 Basketball Team — 37 players representing the best the 501 has to offer both on and off the court. The team is sponsored by Conway Ortho and Sports Medicine, Conway Regional Health System and First Security Bank. Hicks was nominated by her coach, Michelle Birdsong.


“Sydney is a leader, defensive specialist and can shoot,” Birdsong said. “Off the court, Sydney is very encouraging to students who are struggling with personal issues; she’s very caring for others. Sydney has a great heart.”


Hicks leads her team with love, making a concerted effort to be present for her teammates.


“There are so many people dealing with everyday struggles and tend to feel alone, but I think it’s important that my team knows they can come to me or anyone else on our team whenever they need to,” Hicks said. “I want to be remembered as being hardworking and kind-hearted, and a person that knew how to make someone’s day just a little bit better.”


Off the court, Hicks is captain of Searcy High’s Fellowship of Christian Athletes. The senior is also involved in Spanish Honorary, Beta Club and National Honor Society. In the community, Hicks participates in the Classy Lady Foundation. “It’s a non-profit organization that prepares young women for adult and work life; shows them mental, spiritual and physical health; and furthers their walk with Christ,” Hicks said.


After high school, Hicks plans to attend Arkansas State University and major in international business. Hicks says her future wouldn’t be possible without the support of her family.


“My father, Freddy Hicks Jr., has helped me both on and off the court,” Hicks said. “He’s taught me everything I know. Also, the rest of my family has helped me by simply being my support system and uplifting me when I have good or bad games. I’m very thankful for all that they’ve done for me.”


Hicks and the Lions play host to Greenbrier at 6 p.m. Friday.