by Sonja J. Keith
The announcement that Hewlett-Packard would locate a state-of-the-art customer service and technical support center in Conway was nearly 10 years in the making. 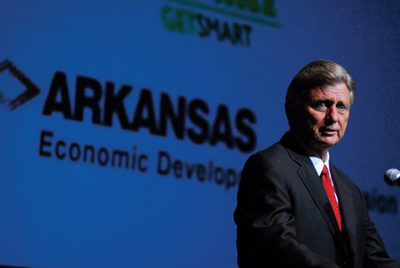 Not only will it mean 1,200 new jobs and a boost to the economy, it also represents the vision of city leaders, years of hard work and a cooperative attitude.
Brad Lacy, president and CEO of the Conway Area Chamber of Commerce and Conway Development Corporation, points to the CDC’s decision to create a technology park, which will eventually house the HP facility, as a major factor in Conway’s ability to lure the company.
“The park has the type of environment they were looking for, and we’re the only game in town and perhaps the whole state.”
The idea for a technology park – kicked around for several years – was suggested by Wadley-Donovan (a New Jersey consulting firm) during a study conducted years ago that looked at Fortune 500 companies and what they would consider Conway’s pros and cons. Lacy said the park would help Conway “take advantage of one of its advantages” when it came to recruiting industry – a young, educated workforce.
The park was created with specific requirements – including guidelines on building design and landscaping – that “resonated” with HP officials, according to Lacy. It represents a public/private project, with the CDC purchasing the property and the City of Conway investing in its infrastructure.
As the technology park was developed, Lacy thought, “This is going to make us or break us. It was going to be the best thing we had done as a city or a very expensive field.”
The park generated some interest and today two firms already call it home.
Still, Lacy found it discouraging when other companies considered the Conway community – not necessarily the technology park – but opted for another location at the 11th hour. “Without my faith, I probably would’ve quit a time or two but I’ve always felt I was where God wanted me to be,” he said, explaining that if Conway had landed one of the other projects the city would not have had the resources to secure HP. Looking back at those other companies, he said they were “nothing close” to HP.
The Hewlett Packard deal started in mid-February when the CDC fielded an inquiry from a national consultant about “Project Sigma.” Questionnaires were returned and no one heard anything else until late April, when officials made an hour-long visit to Conway. While he already knew that the project involved a Fortune 500 company, it wasn’t until the visit that Lacy was “stunned” to learn the project involved HP – No. 14 on the prestigious business listing.
“We knew in April that it was narrowed to five regions with multiple sites in each region.”
What followed were intense negotiations and more work which included long nights and weekends for those involved with the chamber and CDC. Timing was such that the work fell in the middle of preparations for Toad Suck Daze, one of the largest festivals in the state. “It took everybody in this building to pull this off,” he said. “This team is incredibly talented, creative and hard-working. I’d put them up against anybody.”
In May, HP officials made another visit to Conway. “By the end of the visit they had eliminated all other Central Arkansas sites.”
On June 6, Lacy was at Lake Village, on his way to Florida for a vacation when he received a call that HP had selected Conway. “We all had been on pins and needles. We were all so happy.”
While the technology park was a big enticement for HP, Lacy points to the many other factors that worked to Conway’s favor – from a thriving downtown and how the city looks to the recently passed bond issue for parks. “The journey started eight or nine years ago with some deliberate decisions by many different groups, he said. “There are so many pieces to the puzzle that fell into place.”
Other factors that typically affect a company’s decision to locate in a community, which worked in Conway’s favor, included quality housing, parks, national retail businesses, a good public school system and the three institutions of higher learning. Conway has an added bonus – a locally-owned utility.
The HP announcement brought to fruition the vision that many individuals had in creating the technology park, Lacy said. “It was an incredible validation of a lot of hard work.”
Lacy is proud of his staff and his city, and their hard work. “It was overwhelming to look out (on June 19) and see a community full of people who care about Conway,” he said, explaining that many had made financial investments that benefitted the work of organizations like the CDC and the chamber. “It’s meaningful that people believed in a vision when you had nothing else to offer them.”
“It was the best day of my life, professionally.”
Lacy points to Conway’s previous successes – like securing Hendrix College years ago – in putting the HP announcement in a historical perspective. “This is exactly what Conway has done before. Conway has always been a risk taker and it has paid off in a big way,” he said. “Conway’s had good leadership and leaders not afraid of change. They have embraced change and have not seen it as a threat.”
Lacy characterizes Conway residents as “fiercely independent” and willing to work hard at what they want. “This story isn’t just about what happened between February and June. This is about a community that believed.”