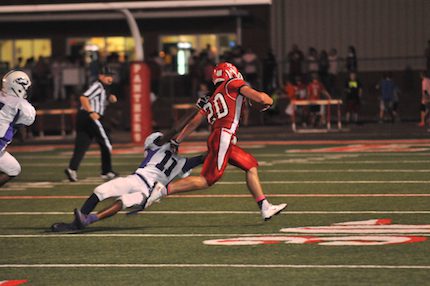 12 Aug Heber Springs: Panthers back with 17 starters for playoff hunt

2013 was not one to remember for Heber Springs fans, but a year like that can happen to any program that’s having to rely on underclassmen. Luckily for the Panthers, those underclassmen are now upperclassmen this fall, and they’re under new leadership — David Farr, who was promoted to head coach.

“We had a great group of kids last season that went through a learning experience,” Farr said. “We improved from week to week in every phase of the game. [Our defining moment was] battling Clinton at home. Although we came up short, I was very proud of the way our kids fought.”


Heber Springs returns eight starters on offense and nine on defense. Senior Chandler Marquardt returns at running back after rushing for more than 1,000 yards in 2013. He’s also a member of this year’s 501 Football Team.


“I expect Chandler to build on the success that he has had his sophomore and junior years,” Farr said. “He has progressively gotten better each year, and I have no doubt that this season will be no different. He is a devout worker, and his advances are a direct correlation to his work ethic.”


Zach McCormick returns on the offensive line after grading “above 90 percent on the year” in 2013. Other expected starters on offense include: Kody Youngblood, Dylan Platt, Billy Bodron and Jordon Hatsell on the offensive line; Hunter Chandler at quarterback; Edgar Torres at running back; and Chandler Jones, Dillon Moore and Conner Lindsey at wide receiver.


Expected starters on defense include: Logan Rolleigh, Alex Diaz and Spencer Greene on the defensive line; and James Ketchum, Harley Johnston, Will Brown, Alldonn Skelton and Sterling Castleberry at linebacker.


“I expect to show marked improvement due to more experience on both sides of the football,” Farr said. “The 2-4A is always a volatile conference. We gained West Helena, CAC and Riverview. Our strengths will be our offensive line, more experience and physical strength. Our weakness will be replacing the quarterback position.”