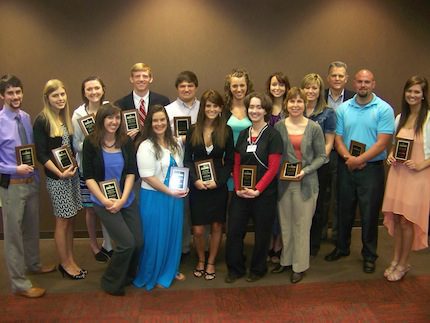 The students received scholarships based on grade point average, leadership ability, activities and financial need. Scholarship recipients and their families were recognized during a reception in the Conway Regional Auditorium.

During the reception, Conway Regional President and CEO Jim Lambert recognized the support of the medical staff which donated funds for seven of the scholarships as well as several private scholarship donors. “This type of support is essential to the future of health care in our community,” he said. “This is a great example of how physicians and other donors can give back to the community through contributions to the health foundation.”


Lori Ross, chief development officer, presented the scholarships and told of the history behind each award. Physicians on the Conway Regional medical staff make an annual donation to fund scholarships. The six Conway Regional Medical Staff recipients are:


Another medical staff scholarship was named after Dr. William Furlow, a retired Conway physician. The recipient this year is Joshua Ryan Blaylock of Conway. He has been accepted into the UAMS College of Medicine and has an interest in orthopedics. Blaylock holds a bachelor’s degree from the University of Arkansas at Fayetteville. He is a graduate of Conway High School.


Two students received the Dr. James S. Garrison Scholarship which is given in honor of the late Dr. Garrison, a radiologist who began the Conway Regional Radiology Department:


The Eleanor Duncan Scholarship memorializes a highly-respected oncology nurse at Conway Regional. Angela Payne of Vilonia will major in nursing at Arkansas Tech University with plans to become a hematology/oncology nurse. She will graduate from Vilonia High School.


One scholarship is being provided through Conway Regional’s Nursing Retention and Recruitment Committee.

Individual employees make contributions to the fund and the committee holds fundraisers to replenish the scholarships.


The John and Janice Robbins Scholarship is funded by the Conway Regional Women’s Council in honor of contributions to the community made by the former president and CEO of Conway Regional and his wife. This year’s recipient is Andrea Gosnell of Conway. She will pursue a bachelor of science in nursing degree from the University of Arkansas at Fayetteville and will graduate from St. Joseph High School.


Tyler Castleberry of Conway was awarded the Jon Scott McMahan Memorial Scholarship. The scholarship is funded in memory of the late Jon Scott McMahan, a division fire chief with the Conway Fire Department and a long-time EMT in Conway. Castleberry has been accepted into the ASU paramedic program and is working toward a paramedic license. He is a firefighter for the city of Maumelle and holds a certificate from SAU Tech in Camden. He is a graduate of Conway High School.


The Mary Ann Stiefvater Scholarship honors the 50-year leader of Conway Regional’s medical information services. This year it was awarded to Kendra Massa of Conway. She is pursuing a bachelor’s degree in health information management from the University of Cincinnati. She holds a degree in medical records technology from UAMS and a degree in biology from UALR. She graduated from Stuttgart High School and is a coding supervisor at Conway Regional.


The Lawanna Thessing Laboratory Scholarship memorializes a highly-respected employee in the Conway Regional Clinical Laboratory and was awarded to Brandy Holt of Clin
ton, who has been accepted into the histology program at Hartford Community College. A current employee of the Conway Regional Laboratory, she holds a bachelor’s degree from Southeast Missouri State University and an associate’s degree from Ozarks Technical Community College and is a graduate of Logan Rogersville High School in Missouri.


Anyone who is interested in contributing toward a health care scholarship fund at Conway Regional can contact Dot Welch, associate director of the Conway Regional Health Foundation, at 501.513.5771 or donate online at ConwayRegional.org.