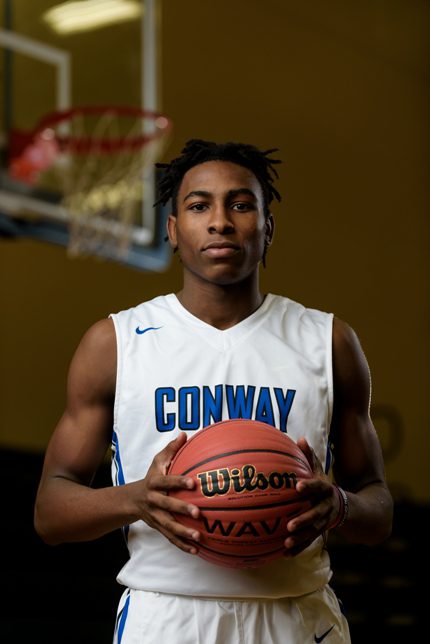 
For Kendarious Smith, everything starts with the right attitude. The senior guard has developed over the last two seasons into a true leader for Conway High basketball.


“My personal goal every day is to be a great leader for my team, have a great attitude on and off the court, be humble and work hard,” Smith said. “If you do those things every day, success will follow.”


Smith transferred to Conway from Perryville after his freshman year. The transition held its struggles, but Smith has blossomed into a significant talent for the Wampus Cats.


“The transition from 3A to 7A was a challenge,” he said. “At Perryville, I played post because I was the biggest guy on my team, but Conway was a complete turnaround. I had to overcome the challenge of learning how to play guard with no experience. I’m still learning every day and still developing.”


Smith has been Conway’s leading scorer the past two seasons. Over the last four 7A Central conference games, he’s averaging 23.7 points per game. Last Friday at home against Fort Smith Southside, Smith dropped a season-high 32 points.


Smith was selected to this year’s 501 Basketball Team — 34 players representing the best the 501 has to offer both on and off the court. The team is sponsored by First Security Bank and First Service Bank. He was nominated by his head coach, Will Johnson.


“Kendarious is our returning leading scorer and one of our better defenders,” Johnson wrote in his nomination. “He’s a great leader on the court, and it starts with his work ethic in practice. He’s a good teammate because his teammates respect his work ethic and attitude. They know he’s going to bring everything he’s got daily on the court and in the classroom.”


Smith invokes echoes of a special Wampus Cat of the past.


“He reminds me a lot of Preston Purifoy from those great Wampus Cat teams seven or eight years ago,” said Jeff Matthews, play-by-play announcer for Conway Corp 5 Sports. “KD plays with that same smooth, easy effort like Preston did. The quality that stands out the most is the control that he plays with.


“He has the ability to go straight up on a mid-range jump shot when most players at this level lean into the defender and either get the shot blocked or run the risk of being called for an offensive foul. KD is as good as I’ve ever seen at doing that.”


Smith has only been playing basketball since the sixth grade (and even skipped hoops his seventh-grade year to focus on football), but his natural talent has shown through in a shorter number of years of experience.


“My close friend, Aaron Givens, had basketball practice one day for the elementary school, and I went with him just to watch,” Smith said. “The peewee coach, Cliff Jones, asked if I wanted to practice. I’ve loved the sport ever since that day.”


The Wampus Cats currently sit at 13-9 overall and 5-4 in 7A Central play. Conway has played above external expectations this year, and is primed for a strong regular season finish and 7A state tournament run.


“I look forward to every game,” Smith said. “Every game in 7A Central, you have to be ready to compete at all times. I feel like every game we play we are the underdogs. We definitely have a chip on our shoulder.”


“I think this team’s best basketball is ahead of it,” Matthews said. “They are playing in the toughest conference in the state and holding their own — winning some games on the road — and competing in the losses. This schedule will benefit them when we get to the tournament in Van Buren.”


“I see him continuing to improve on the court as a player and as a leader,” Matthews said. “He’s a steadying influence on this team and can play multiple positions. On the college level, I can see him playing shooting guard — he is a great ball handler and scorer.”


As his high school career draws to a close, Smith is focused on soaking it all in, including learning all he can from Coach Johnson.


“He is always teaching us to be better on and off the court,” Smith said. “He stresses how basketball relates to life on a daily basis, how it disciplines you and how it shows you how to handle adversity.


“Coach Johnson is a man who loves to win and hates losing. He shows us respect and wants every player to get better every day. He wants you give 100 percent and have a great attitude while doing it.”


Conway plays host to the defending 7A state champions, the Cabot Panthers, at 7:30 p.m. Friday.