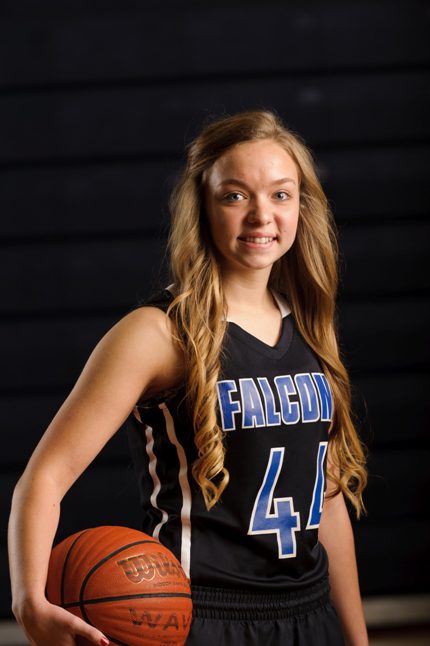 
One thing’s for sure about Joeli “Jo” Harvey. She’s a believer — in her family, teammates and faith.


Harvey, a senior guard for the Faulkner County Falcons, was selected to this year’s 501 Basketball Team — 35 players representing the best the 501 has to offer both on and off the court.


“My goal this season is to be the best I can be in [basketball] and everything I do and to show people Christ through it all,” Harvey said.


Harvey was nominated by her head coach, Scott Coffey.


“Jo always brings tremendous hustle to the court,” Coffey said. “She is very coachable, is a great listener and gives maximum effort on every play and drill. She is very sweet, respectful and never complains. She’s also very humble and considerate to everyone, even to the younger players that look up to the older ones.


“She’s encouraging to other players and sets a great example of attitude and effort.”


According to Coffey, Harvey blossomed last season and developed into a defensive presence for the homeschool team.


“We believe in a strong defense, and Jo will be an integral part of the Falcon defensive effort,” Coffey said. “She has quick feet and is able to apply pressure all over the court. We’ll also depend on Jo for leadership of our young team.


“Jo continued to improve throughout last season. She made some big contributions with her defensive quickness as well as her hustle going after every loose ball.”


For Harvey, the key to her development last season and the driving force for growth this season is one and the same — confidence.


And it’s not just about confidence on the court. Off the court, Harvey has become just as confident in who she is.


“I overcame the fear of not fitting in, in a world that won’t accept you unless you act the way they want you to,” Harvey said. “I learned it is always better to follow the Word of God and to do what the Lord says is right instead of what the world says is right.”


Harvey is the fifth oldest of seven children and has been homeschooled for 12 years.


“She has been an excellent example to her siblings in every way — spiritually, academically, morally and in physical fitness,” Coffey said. “She’s always willing to do whatever it takes to help her family members.”


Harvey is also active in volleyball, softball and soccer.


“I enjoy hanging out with my friends and family, most likely camping, chopping wood, hunting, riding four wheelers, mudding, fishing or just playing with my dogs and pig,” Harvey said.


Off the court, Harvey volunteers at the Soul Food Café Mission every Tuesday, and she serves as a leader in the children’s ministry at Four Winds Church on Sundays.


As she continues through her final season as a Falcon, Harvey says she is continuously amazed and inspired by her teammates.


“[I’ve realized] how amazing my team is and how each and every player puts 110 percent into every sprint down the court, workout and drill we do as a team,” Harvey said. “I see the love for Christ and the sport in all of my teammates and our coaches, and that’s a pretty amazing thing.”