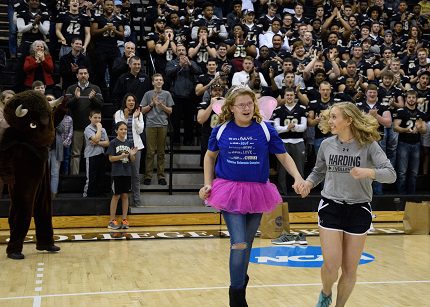 The Harding University Student-Athlete Advisory Committee partnered with Make-A-Wish Mid-South to raise more than $8,000 and grant a wish for Alissa Carter, an 11-year-old Searcy girl diagnosed with a critical illness. The reveal celebration was held Feb. 25 in the Rhodes-Reaves Field House at Harding. Hundreds of athletes, students, faculty and staff members gathered for the event.

Alissa’s family brought her to campus Sunday where she expected to receive an award for a Bison coloring contest.


“Little did she know that it was actually a reveal party, and that her wish had been granted,” said Robert Carter, Alissa’s father. “My daughter was happier than I’ve ever seen her. I would love to do it all again.”


Alissa’s wish was to have her own fairy-themed treehouse. Natural State Treehouses in Fayetteville has already begun constructing the treehouse with plans of installing it at Alissa’s home this week, weather permitting.


“We met with Alissa’s family several months ago to begin designing the concept for a fairy treehouse,” said Josh Hart, owner of Natural State Treehouses. “When we went into the workshop, it was our goal to build something unique, something magical. Every kid needs a space of their own. Alissa’s treehouse will be right beside her house, but she will feel like she’s in her own magical world a million miles away.”


Each school sets its own fundraising goals for Make-A-Wish.


“In previous years, we would raise money, send it in to the [Great American Conference] office and then check it off the list,” said Jack Thomas, president of Harding’s SAAC and a Bison baseball player. “This year, however, we wanted to do something different. One of my initiatives as president was to bring this effort closer to home by granting a wish for someone in our community. To my surprise, we raised more than $8,000 and were able to grant a wish for a child from Searcy.”


According to Amanda Wiig, Make-A-Wish Mid-South director of marketing and communications, recent studies have shown that wishes are more than a gift to families.


“They can truly change the trajectory of a child’s life, replacing sadness and fear with hope and joy,” Wiig said.


“As student-athletes we have a responsibility to take part in Harding’s Community of Mission, and for us that means doing what we can to serve Searcy,” Thomas said. “My No. 1 hope is that we were able to create a lasting memory for Alissa and her family.”