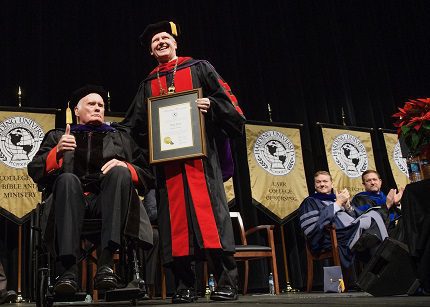 Lads to Leaders founder Jack Zorn was awarded an honorary doctorate of laws degree from Harding University for his contributions to the development of Christian leaders through his groundbreaking work with Lads to Leaders and Leaderettes. The degree was conferred during the university’s fall commencement ceremonies on Dec. 16.


“Dr. Zorn’s name is synonymous with Lads to Leaders,” McLarty said. “He has invested himself fully and profitably in helping to train the next generation.”


After receiving a bachelor’s degree from Alabama Christian College — now Faulkner University — Zorn earned a master’s degree from Harding Graduate School and a doctorate in religious education from the International Bible Institute and Seminary.


In 1968, he founded Lads to Leaders Inc., a training program aimed at developing youth into Christian leaders. The program has experienced tremendous growth since its first year starting with only eight young men. After nearly 50 years, more than 20,000 people in congregations across the United States and several other countries use this tool to teach their youth to be leaders in their churches and communities.


“What began with a commission became a dream and then a plan and today is a phenomenal program that helps to train tens of thousands of young men and women to be spiritual leaders,” McLarty said.