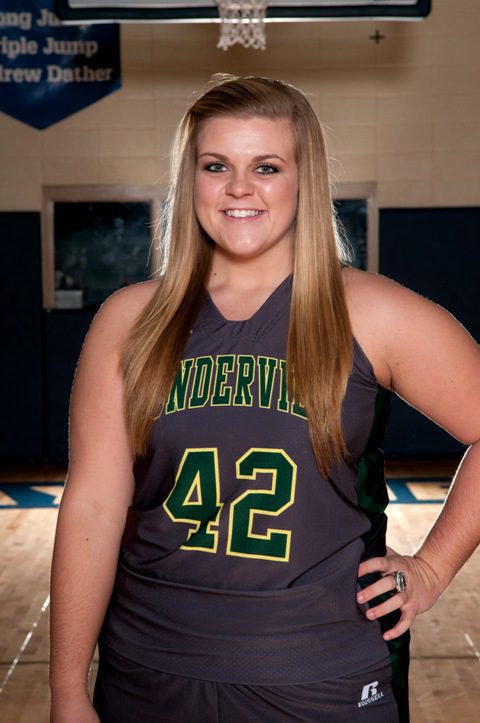 
Wonderview center Shelby Williams does it all, and then some. The vocal senior has guided and motivated her teammates on the basketball court since the third grade.

“[Basketball] was a way to just make friends,” Williams said. “I always liked to play sports that had other people involved. I liked the team concept.”


Williams was nominated and selected to the inaugural 501 Basketball Team, which is made up of male and female student-athletes honored for their on- and off-the-court accomplishments and contributions. She was nominated by her coach, Jeremy Simon.


“Shelby is a responsible, kind-hearted, hard-working person with a great attitude,” said Simon. “Her great attitude, hard work ethic and experience as a player have made her a good leader for all our younger children.”


This year, as the lone senior for the Lady Daredevils, Williams understands the importance of being a strong leader.


“Personally, I just want to continue my role as a leader on the team and influence everyone to play their hardest and play their best,” Williams said.


Williams’ leadership on the court has led to much success for the Lady Daredevils.


“In the past two years, Shelby has helped our team to win a district championship, two regional championships, a state championship and a state semifinal appearance,” Simon said. “Her size, strength and ability to move her feet makes it tough on anyone to score around the basket.”


With the team’s success in recent years, the expectations are high for the Lady Daredevils this season.


“We made it to the semifinals last year and our point guard hurt her ankle really bad, so we lost in overtime,” Williams said. “This year, we really want to play together and win the championship titles that are there for us to get.”


Off the court, Williams is involved in a number of clubs and activities at Wonderview, including Future Business Leaders of America and Fellowship of Christian Athletes. She even volunteers as a manager for the school’s baseball team. However, one of the biggest challenges for many high school athletes, including Williams, is finding a balance between academics and athletics.


“Trying to balance athletics and keeping your grades up is a big factor,” Williams said. “Finding the time to get it all done is hard.”


“I grew up around horses, ever since I was a few weeks old,” Williams said. “I’ve always been around them, and it’s one of those things you grow up around. It becomes a part of you.”


And as if her plate wasn’t full enough already, Williams still finds time to give back to her community.


“This summer I volunteered at C4 at the Safe Haven program with children,” Williams said. “It’s fun. I love being with kids.”


“Shelby is actively involved in her community,” Simon said. “She has numerous volunteerism hours for her local school and community she lives in. Through Wonderview’s EAST program, she has participated in the roadside cleanup and gym restoration. Shelby has also spent her time helping with the Pee Wee Basketball Summer Camp by working with elementary students. Last year, she also worked with her classmates by volunteering at the Pee Wee Basketball Games.”


And though her calendar is always full, at the end of the day, Williams is proud to give back to the community that has given her so much.


“I’ve lived in the 501 since I was 4,” Williams said. “It’s kind of like basketball, being close with everyone and being a team. It’s really small here, but when you’re in such a small area, you know everyone and it makes for a close community.”