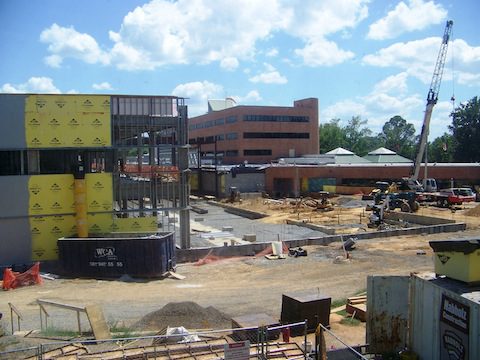 Hard hats are in vogue at Conway Regional Medical Center these days as construction crews work to meet an April 2012 deadline for the completion of a 95,000-square-foot addition to the medical center.


The new wing will house a state-of-the-art surgery department and will add eight obstetrics rooms to the women’s center. The east side of the addition, which will connect to the Women’s Center via a second floor covered bridge, is “in the dry.” Large steel piers are being installed to anchor the foundation for the west side, which will house many of the new operating rooms. A topping out ceremony is planned for Wednesday, Sept. 7.

Conway Regional President and CEO Jim Lambert said the rapid growth of Conway and the surrounding areas demands this type of expansion to accommodate the health care needs of the community. “As a community based, not-for-profit health system, it is our mission and responsibility to reinvest in health care services that benefit the community,” he said. “We are deeply grateful for the support we’ve received from this community over the past 70 years and we feel obligated to aggressively move ahead to complete the new facilities as soon as we can.”


A steering committee of 20 members of the community, including physicians, has formed to take on the task of raising funds to support the $32 million project.


A groundswell of early support for the ONE Campaign is forming and some healthy donations have been received from segments of the hospital staff, physicians and the business community. In fact campaign co-chairman Bill Farris recently announced that the ONE Campaign has raised $1.5 million toward its goals.


Recent donations have included a three-year $500,000 commitment from Conway Corporation. The Conway Regional employee campaign has raised more than $70,000. The Conway Regional volunteer organization announced in April that they will contribute $95,001 over three years toward the purchase of a new sterilizer unit for the Surgery Department. The Conway Regional Golf Classic in June raised $30,000 and all those funds are also being directed toward the ONE Campaign.


For details about how to get involved, visit ConwayRegional.org/ONE.