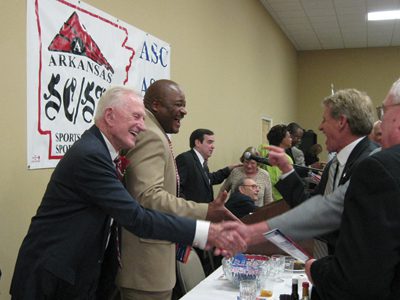 In 1968, Wadie Moore entered the old Arkansas Gazette as the first black employee of the newsroom.

Forty-three years later, he entered the Arkansas Sportscasters and Sportswriters Hall of Fame before a record crowd of 432 at the Centennial Valley Country Club Special Events Center in Conway.

Moore, of Little Rock, the long-time Gazette high school sports editor, became the fifth sportswriter inducted into the organization, joining the late Orville Henry (2007), Jim Bailey (2008), Harry King (2009) and Jerry McConnell (2010). All worked at the Gazette, which died in 1991.

Frank Broyles, best known as the former long-time football coach and athletic director at the University of Arkansas, became the latest sportscaster inducted. After retiring from coaching, he spent nine years as a college football analyst for ABC Sports, paired with fellow Georgia native Keith Jackson. Broyles followed the late Paul Eells, the late Bud Campbell, the late Jim Elder and Pat Summerall into the Hall of Fame.

Bailey, who worked with and mentored Moore during the 23 years the younger man spent at the Gazette, recalled that by 1968, desegregation was slowly making its way across American society, “but very few newspapers across the South had integrated [newsroom] staffs.”

“There were certainly none around where we were,” Bailey said.

Henry, the long-time Gazette sports editor, and the late Hugh B. Patterson, publisher, hired Moore out of Little Rock’s Horace Mann High School on the recommendation of that school’s vice-principal. Within a few years, Henry made Moore high school editor in charge of coordinating game coverage, doing the Gazette’s Best Dozen rankings and writing columns and feature stories. He eventually became part of what Bailey called “Orville Henry’s Flying Express,” covering the Razorbacks on Saturdays – but only after supervising the paper’s Friday night coverage and preparing its two-page high school section for Sunday.

“I don’t know if Wadie ever slept – ever,” Bailey said.

For his part, Moore remembered Bailey swinging his chair around from the adjacent desk to tell him, “Wadie, that’s the best story you ever wrote.”

“From that point on, I always tried to impress Jim Bailey,” Moore said of his long-time friend.

Moore said he got his religious values from his late mother and his work values from his father, Wadie Moore Sr., who was at Centennial to see his son inducted, as were the honoree’s siblings, son, Jackie; and wife, Octavia, whom he first knew in 1971 when she played for Guy-Perkins and became MVP of the first Arkansas High School Girls All-Star basketball game.

Over his career, Moore turned down job offers from newspapers in St. Louis, Detroit, New York, New Jersey and San Francisco, never telling his superiors about the other papers’ interest.

“Obviously, he stayed where he wanted to stay,” Bailey said.

In his remarks, Moore said he’d promised himself he wouldn’t tell any old Gazette stories, but he broke that promise, to the delight of the crowd. He remembered having “the shortest interview in history” because when he arrived, Henry was on his way to the bathroom. He turned around to talk to him in the sports department for a few minutes.

He remembered the plane trips to cover the Hogs with Henry, a few other writers and a couple of photographers, starting with a single-engine plane, then a twin-engine six-seater that required three hours to go from Little Rock to Lubbock and ultimately a King Air nine-seater.

“I got real close to God then,” he said of those Little Rock-to-Lubbock flights.

After a video greeting from his old broadcast partner Jackson (“I loved working with him, loved him as a man. Frank, congratulations – and bless your heart”), Broyles was introduced by the other Keith Jackson, the former Oklahoma and NFL player who now does color commentary on Razorback football broadcasts.

Jackson entertained the crowd with tales of mix-ups regarding himself and the ABC broadcaster.

“You do realize I’m the black Keith Jackson, right?” he remembered asking Broyles when the older man called to talk to him about doing color commentary on Razorback football broadcasts.

Broyles, about to turn 87, spoke of his “charmed life” as coach, athletic director and broadcaster.

“I enjoyed every minute” of his nine years with ABC, he said. “That allowed me not to sit at home and sweat out Razorback games.”

He and Jackson were the country’s premier college football broadcast team during the late ‘70s into the ‘80s, when there was one televised game on Saturdays. The video introduction included footage from the 1979 Sugar Bowl between Alabama and Penn State, which the pair covered.

Joe Mosby, the state’s best-known outdoor writer who worked as outdoor editor at the Gazette from 1969-91, was honored with the Lifetime Achievement Award. He wrote his first outdoor story 60 years ago when he was a junior in high school – on opossum hunting. After the Gazette closed, he spent several years writing for the Arkansas Game and Fish Commission, and his career continues as a syndicated columnist for Stephens Media.

“I was interested in sports all my life,” he said. “I was too skinny for football. I tried basketball, but I couldn’t jump enough. In baseball, you talk about good fielder, no hit – I met half of that criteria. I stuttered, so I couldn’t be a broadcaster. I was too nervous to steal, so I became a writer.”

He became an outdoor writer when the Gazette had an opening, and the managing editor called him in and told him he was the new man.

“I knew I was being told to go around Arkansas to write about hunting and fishing,” he said. “I thanked the man politely, asked for a pay raise and got it.”

Like Moore, he spent most of his Gazette career under the legendary Henry.

“We had quite a sports staff,” he said. “You see several at the head table and others out in the audience. But times change. The Gazette died. Rest in peace, Arkansas Gazette. We change, and life goes on.”

He thanked his wife of 57 years, Mary Ann, for keeping his feet on the ground.

“Sometimes I craft a piece of priceless prose, and she’ll remind me to take out the trash before I sit down for supper,” he said.

Nixon praised coaches’ wives for their roles in their husbands’ careers. He and his wife, Betty, have been married for 62 years.

Arch Jones Jr. accepted the Service Award on behalf of his family after his father died in the spring. He urged the audience to continue to remember what his father taught: “Be a blessing to all you meet, encourage others and remember we’re all more alike than we are different.”