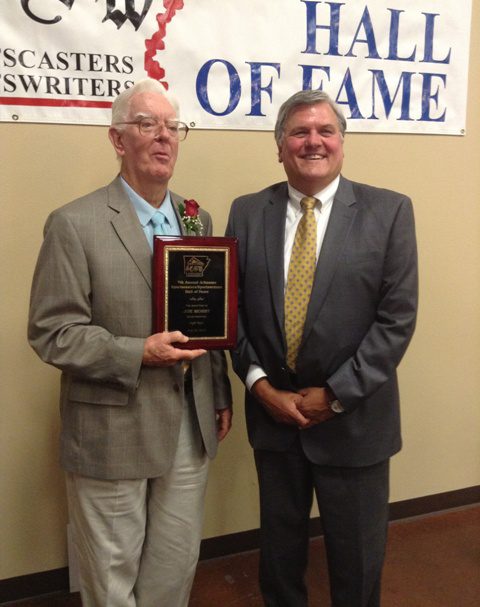 Mosby and Sullivan made up the seventh class and were inducted during a banquet at the Centennial Special Events Center in Conway.


Mosby, 82, has been a journalist for 61 years, most notably for the old Arkansas Gazette from 1969-91, the Arkansas Game and Fish Commission, Stephens Media and the Log Cabin Democrat. While he is best known as an outdoor writer and editor, covering hunting, fishing, camping, bird-watching, recreation and other such topics, he has also covered many other sports, including high school and college events, and all kinds of news, particularly during his stints with a couple of newspapers.


“I don’t know why I became a writer,” Mosby said during his acceptance remarks. “No one in my family was a writer. Most of them were normal.”


After graduating from high school in Memphis, he transferred from what is now the University of Memphis to the University of Arkansas, where he worked on the student newspaper, the Arkansas Traveler, alongside Robert McCord, Jerry McConnell and Charles Allbright, all of whom would join him eventually as legends of Arkansas journalism. He also got a start professionally at the UA, he admitted, when he ”wrote and sold term papers.”


During his early stint with the Log Cabin, he worked under the late Joe McGee, where he learned “the holy trinity” of journalism: get the story, get it right and get it in the paper.


He married a Conway girl, the former Mary Ann Starr, who has been his frequent traveling companion for most of those 61 years.


The late Orville Henry, long-time sports editor of the Gazette, had to call him twice to get him to Little Rock.


“I didn’t think I’d be comfortable at a big city newspaper,” Mosby said.


He started at the Gazette in sports and became outdoor editor unexpectedly.


“Four hours (after the previous one died), the managing editor called and said, ‘You’re the new outdoor editor,’” Mosby recalled.


Mosby was inducted into the Arkansas Outdoor Hall of Fame in 2002 and has been recognized by the Arkansas Press Association for his years of service to journalism. He also is a past recipient of the Arkansas Activities Association’s Distinguished Service Award.


While appreciative of Saturday’s honor, he closed: “I thank the Lord for making me a husband, daddy, granddaddy and great-granddaddy,” he said.


Sullivan, born and raised in Framingham, Mass., came to Arkansas almost on a fluke. One of six children, he said he didn’t have much money for college, so he and a buddy came up with a scheme to finance their higher education.

“We invested in a greyhound,” Sullivan remembered. “I had to pick a school that was cheap, had a radio/television program and was close to a race track.”


Arkansas State was the winner, and he’s been in the Natural State ever since.


“I lasted longer than the dog,” he joked.


After graduation, he took a job at KFBW, a Fort Smith radio station, and later moved across town to KHBS-TV. From there Bob Steel hired him at KARK Channel 4 in Little Rock. After 12 years there, he moved to KATV, working alongside the legendary Paul Eells. After Eells’ death in 2006, he was named sports director.


“As you get older, you treasure relationships more than accomplishments,” said Sullivan, a former Arkansas Sportscaster of the Year. “Without a doubt, the highlight of my career has been working with Paul Eells.”


Sullivan does play-by-play for University of Central Arkansas football and has served in the same role for ASU, Henderson State, Harding, UALR, Greenbrier, Benton, Fort Smith Northside and Southside.


Previous hall of fame inductees included Orville Henry and Paul Eells in 2007, Jim Bailey and Bud Campbell in ’08; Harry King and Jim Elder in ’09; Jerry McConnell and Pat Summerall in ’10; Wadie Moore and Frank Broyles in ’11 and David McCollum and Mike Harrison in ’12.


Jimmy (Red) Parker, about to turn 82, was given the Lifetime Achievement Award. He started his coaching career at Fordyce in 1953 and has also coached at what is now the University of Arkansas at Monticello, The Citadel, Clemson, Vanderbilt, Southern Arkansas, Delta State, Ole Miss, Ouachita Baptist and Rison. He started the Benton Harmony Grove football program a few years ago.


“I’m trying to get Harmony Grove to give me a couple of more years to get some age and experience on me,” joked Parker, now operating with an artificial heart. “If you love what you do, you’ll never work a day in your life.”


Josh Harrison of Conway, who is battling Stage 3 melanoma, was recognized as member of the year of the Arkansas Sports Club, the sponsoring organization of the Hall of Fame.


Dick (Lefty) O’Neal, a former UCA football and baseball player and the only white player to pitch in the Negro Baseball Leagues, was master of ceremonies.