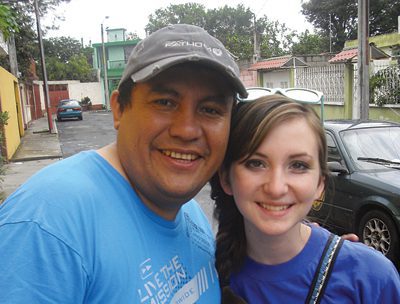 This summer, I was blessed beyond belief during a mission trip to Guatemala.

I was able to go to Guatemala fully on donations. I saw this as God’s way of making sure I got to Guatemala, and it showed me that He had some big plans in store for me when I got there.

We partnered with Iglesia Biblica, a church planted by my home church in Little Rock, while we were in Guatemala. They run the Compassion International program in Guatemala City, and we led a Vacation Bible School for the Compassion kids during the afternoons. To be able to love on these kids every day for a week was so much fun.

I also had the privilege of visiting their homes. I knew that the homes were small and beat up, but it wasn’t until I was standing in their houses praying over their families that I truly got to see how these kids live.

One particular house that I visited had only one room, made of metal and extremely worn down. The woman there said that although she knew her house was small and she didn’t have much to offer, she was so glad that we had come to see her and her son. It opened my eyes to how much we have, but how much we take it for granted. She was so appreciative of the little she had, while we have so much more than her but rarely stop to be thankful for it. It’s given me a new perspective since I got home.

I was also moved by the passion of these people. We attended a church service at Iglesia Biblica on Sunday morning, and it was absolutely incredible. They sang all of their songs in Spanish, but they were translated from English versions of songs we knew. We were able to sing in English while they sang in Spanish, and it was one of the coolest things I’d ever heard. It showed me that God does not just speak English and He is not just reigning over America, but that He hears our praises no matter what language they’re in. He is King over the entire world.

Every time we prayed, people were on the floor weeping – not just teary like we sometimes get in church – they were actually weeping. It showed me how big God is – these people who have so little and have been through so much have had their lives completely turned around by the Lord.

Guatemala has a special place in my heart now, and I hope I get to go back next year.

I can honestly say that Guatemala was one of the best experiences of my life.


A sophomore at Conway High School, Katie is a daughter of Crystal and Mike Kemp. Her family attends Fellowship Bible Church Little Rock.