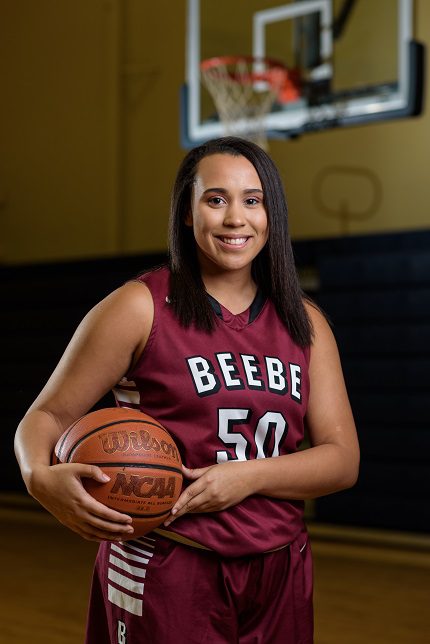 
After suffering an ACL and meniscus tear in May 2016, Katie Turner worked her way back on the court earlier than expected, returning for the second half of her junior campaign last season.


Turner averaged 10 points and four rebounds to earn all-conference honors and was named to the all-tournament team in the 5A state tourney after returning from the knee injury.


“Katie is a vocal leader who is very humble with her success on the court,” said Greg Richey, Beebe’s head coach. “Teammates have seen how hard she has worked to get back to full strength this year. Katie is always there to support and listen to her teammates, and they recognize that it is genuine and she really wants all of her teammates to develop and become better players.”


After a shortened junior season, Turner is back this year at full force for the Badgers, who as of press time are 7-2 in non-conference play. Through nine games, the senior is averaging 16.7 points, 5.4 rebounds, 2.1 assists, 1.7 steals and 3.1 blocks per game.


Turner, a senior forward for Beebe, was selected to this year’s 501 Basketball Team — 37 players representing the best the 501 has to offer both on and off the court. The team is sponsored by Conway Ortho and Sports Medicine, Conway Regional Health System and First Security Bank. Turner was nominated by Richey.


“Katie has the ability to make all of her teammates better, and she is a good teacher to the younger players,” Richey said. “She is a great encourager to her teammates on the floor. Katie is being actively recruited by different colleges to play next year and will garner more interest as the year progresses.”


“My parents are my biggest mentors,” Turner said. “They introduced me to the game and taught me everything I need to know. They are my biggest fans, but are also there to remind me ways to better myself on and off the court. I wouldn’t be where I am today without their love and support. That is something I will always remember.”


Off the court, Turner is active at Beebe High School in HOSA (Health Occupations Students of America) and the Senior Leadership Team.


“Katie has the personality that is always even keel,” Richey said. “She never gets too high or too low, and this helps her to be consistent in all that she does. She’s involved with church activities and helps with holiday dinners at the Beebe Retirement Center.


“Katie is a very good student and is always on the honor roll at school. She is the type of person that will help others with their class work. She is a leader in her senior class.”


Turner and the Badgers play host to Clarksville at 6 p.m. Monday.