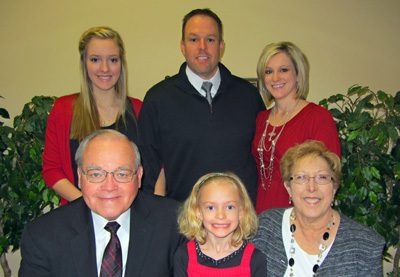 
On April 29, Gaylon King will preach his final sermon at Immanuel Baptist Church, where he has served for 31 of his 45 years as a pastor.

He has tried to live by Jesus’ instruction in Matthew 6:33: “Seek ye first the kingdom of God, and his righteousness, and all these things shall be added unto you,” and God has kept this promise.


“God has taken care of me through his people,” King said. “I wouldn’t change a thing.”


Though he grew up in the church, was saved at 13 and was active, King never wanted to be a pastor. He planned to attend college on a football scholarship, but broke his knee in high school. That ended his football career.


“I thought my whole world had fallen apart,” King said.


Then, while listening to a sermon, King felt God’s first nudge toward the ministry.


“I had a desire to preach right along with Brother Dodson,” he said. “I knew God was revealing something to me, but I didn’t know what it was.” He thought he was simply maturing spiritually.


“Like a lot of young people, I ran from the call.”


King became an occasional church-goer, using his job as an excuse.


First, an accident at work caused him to almost lose his big toe. He prayed; the toe was saved. Following that crisis, another accident at work resulted in partial loss of a finger on his right hand. Reattachment failed, gangrene set in, and King spent a month in the hospital.


He was hospitalized again, this time with an intestinal problem.


“I knew in my heart that if I didn’t surrender, I was going to die,” King said. “I surrendered to the ministry in December 1966,”


When he came to Conway in 1967 to attend Central Baptist College, he and his wife had been married five years. He asked Peggy what she thought about being a preacher’s wife.


“Whatever you do, I’m right there with you,” she said. And she has been. Immanuel secretary Lisa Rust joked that the congregation “put up with” King because of Peggy.


After graduation, King served churches in Farmerville, La., Memphis and Lansing, Mich., and worked for the Arkansas Missionary Baptist Association for a time.


At each pastorate, the Kings made friends, many of whom they’re still close to. He says these relationships are one blessing of his ministry.


“There for a while, I was doing 3-3½-year rotations,” King said. “I felt like the Lord was leading me somewhere else, and I didn’t know where.”


King had his eye on east Texas and the BMA seminary at Jacksonville, but that wasn’t God’s plan. Instead, through an old mentor who was teaching at CBC and attending Immanuel, King was asked to consider a call to Immanuel. Because he was familiar with the area, King agreed.


“When I walked into the pulpit that Sunday, I knew that was where the Lord wanted me to be,” King said.


The highlight of his Immanuel years is “being able to pastor generations of families and seeing them grow,” he said. “That is one of the most important things to me.”


“A tremendous blessing to me is that we’re family,” he added.


When families grow, they need more space. An educational wing was added to original building on Highways 25-65, but parking space was limited. King watched people drive in, drive around and drive out again because there was no parking.


“That broke my heart,” he said. “I started praying.” Ten years after those first prayers, the congregation bought the property on Green Valley Road. They moved into the new building in 2009.


King has also prayed about retirement. He plans to expand time spent as Greenbrier Police chaplain, to work part-time at Bishop Griffin Funeral Home, where he has been helping conduct funerals for a while, to help Peggy more at home and to spend more time on yard work.


And in his “spare” time, he plans to play more golf.


“I’m hoping for a game a week when the weather is nice,” he said.