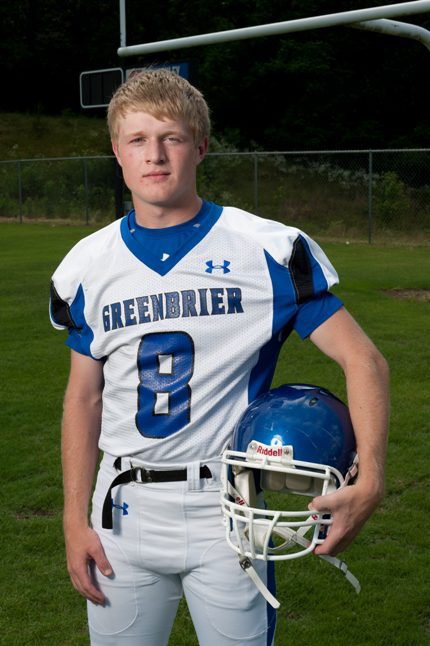 
It was one moment that no athlete ever wants to experience. But for Greenbrier senior linebacker Ethan Edwards, it was a nightmare come true.

A year ago, during a nonconference game against Texarkana, Edwards suffered a severe ankle injury. Not only did the injury end his season, it threatened his future.


“I tore a lot of ligaments in my ankle against Texarkana,” Edwards said. “The doctor said that if I didn’t have surgery, my ankle would be messed up for the rest of my life. He said that I would have had trouble walking by the time I was 30 years old.”


Edwards spent the remainder of the 2013 season leading from the sidelines and cheering on the Panthers, who finished fourth in the 5A West conference with a 4-7 record and a first-round playoff appearance. After a year of rehabilitation, Edwards says his ankle has never felt better.


“I feel great today,” Edwards said. “I’m back 100 percent. I played baseball the entire season, and it didn’t bother me at all.”


Edwards is a member of the 2014 501 Football Team — 24 players representing all 11 counties of the 501. The team boasts the best the 501 has to offer both on and off the field. Edwards was nominated by his coach, Randy Tribble.


“Ethan always treats opponents with respect,” Tribble said. “He is a good teammate and a good leader. He does a good job of helping younger players out and making new players feel welcome. He encourages others and expects the best of himself.”


A week ago, the Panthers opened the season with a 48-29 win over Beebe. With Edwards’ final season underway, the senior intends to take each game as it comes.


“As you become a senior, you take on new responsibilities,” Edwards said. “I played baseball to stay in shape. I’ve been focusing on lifting weights. I’ve been trying to work on my leadership skills to help my team. As long as I play with my best effort and play every game this year and stay healthy, I’ll be happy with the season.”


“I expect Ethan to be a team leader,” Tribble said. “On the field, he is focused and always gives great effort. I expect him to play both offense and defense at a high level.”


Regardless of how the season plays out for the Panthers, Edwards is thankful for his chance to end his high school football career on his own terms, with the teammates and friends that he has grown close to throughout the years.


“I have played with a lot of the guys on the team for a long time,” Edwards said. “I’ve made a lot of good friends: Sam Colbert, Carson Matthews and Michael and Matthew Spainhour. They’re all really good friends. We hunt, play golf and go to midnight movie premieres together. It’s always a good time.”


Off the field, Edwards is vice president of both Beta Club and FBLA at Greenbrier. He also serves as captain of the school’s Quiz Bowl team. He’s an active member of Greenbrier Church of Christ and performs community service around Greenbrier. After high school, he plans to pursue a degree in engineering at the University of Arkansas in Fayetteville.


“Off the field, Ethan is hard working and an excellent student,” Tribble said. “He is humble and treats everyone with respect. He exhibits high character.”


Greenbrier travels to Heber Springs tomorrow night in search of its second win.