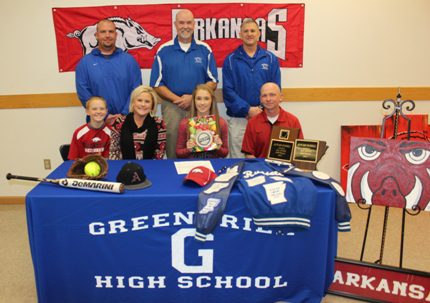 Greenbrier High School softball player Autumn Russell signed a letter of intent on Wednesday to play for the University of Arkansas at Fayetteville – the first athlete from her school to play as a Razorback.

“This is a special day for Autumn and Greenbrier High School,” said athletic director Steve Wood to the family, friends, classmates, coaches and other faculty gathered in the school cafeteria. “She is the first athlete to ever sign with the Arkansas Razorbacks out of Greenbrier High School. That’s a pretty amazing feat and a neat honor.”


Prior to the signing, each of Autumn’s high school coaches shared their congratulations and words of praise for the 17-year-old Greenbrier senior. In addition to softball, Autumn also runs track at Greenbrier High and is a member of the basketball team.


“It’s been an honor to coach her,” said basketball coach Tobin McMammon. “I know if you continue to work hard you will be successful in whatever you do.”


The Greenbrier Lady Panthers have won conference the last three years and were runners-up in state twice.


After signing her letter to become a Lady Razorback, Autumn gave praise to God, thanked her parents and family, and expressed appreciation to everyone gathered at the event. “It’s been a dream for as long as I can remember. Without God it would not have been possible,” she said.


A daughter of Greenbrier natives Ginger and Tony Russell, Autumn began playing softball for an age 6 and under team. Her dad was her coach in those early years through her play in the 14 and under age group. “She is very driven and focused and very well-rounded,” he said.


In addition to the Greenbrier Lady Panther team, Autumn has played with several traveling teams, including the Texas Travelers 18 and under Gold Team, the Germantown Red Devils in Tennessee and Arkansas Extreme at Greenbrier.


Autumn has played shortstop and third base but was recruited by the Razorbacks to play outfield, according to Tony. Other schools that expressed interest in recruiting Autumn include Auburn, Memphis and Tulsa.


“She got the interest from Arkansas early,” Tony said, adding that Autumn verbally committed to UofA during the summer between her sophomore and junior years in high school. “At the first camp she attended at Arkansas, she really liked the coaches and the camp. She’s just always been a Razorback fan.”


Today marked a special celebration for Autumn and her family – the culmination of time and effort to travel throughout the United States to play softball. “It means a lot to see Autumn’s dream come true,” Tony said, adding that they are proud of her and her hard work.


In addition to excelling on the softball field, Autumn also performs in the classroom. Her grade point average is above 4.0 and she is ranked in the Top 10 in her class. At UofA, she plans to pursue a kinesiology degree and would like to be a college athletic trainer.