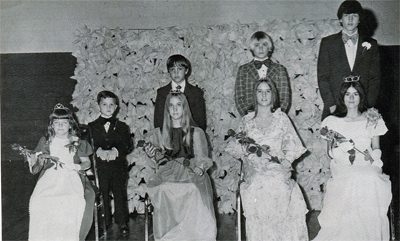 “This is a great partnership between the school district and the community,” said Greenbrier superintendent Scott Spainhour. “The festival generates a great deal of support for the school and for that we are thankful. The money raised is primarily spent at the school level through the PTO (parent-teacher organization).”

When the kings and queens are chosen by their classmates in early October the competition begins. Parents, students, school faculty, friends and neighbors roll up their sleeves and get to work.

The creativity begins to raise money for a worthy cause and indeed very little is off limits. Raffle tickets are sold for big items like a four-wheeler and trailer along with other nice prizes. From selling homemade pies to hay rides in the country, everyone joins in the fun and excitement.

On closing night everyone is eager to attend the coronation ceremonies to see all the class kings and queens. Adorned in their beautiful tuxedos and gowns, it is a sight to see.

Ultimately the classes that raise the most money will win the overall crown, but everyone is a winner. The greatest honor is that each representative was chosen by their classmates.

After the festival, PTO members work with school administrators and teachers to determine how the money is used.

“We are very proud of the long history and tradition of the Greenbrier Fall Festival,” Spainhour said. “We can’t say enough about how much we appreciate the parents and community who work so hard to make it a success year after year.”