This year’s top award recipients selected by the Greenbrier Chamber of Commerce have their own special ways of giving back to the community.

Randy and Rhonda Garrett will be recognized as the Citizens of the Year at the 2019 Greenbrier Chamber of Commerce Awards Banquet on Friday, March 8, at the Greenbrier Junior High Cafetorium.

Jeremy Riddle will receive the Volunteer of the Year Award and Ashlie Green has been named Student of the Year.

“It’s always a great honor to present the annual awards for citizens and volunteer of the year,” said Dustin Chapman, chamber board president. “These are the people that make Greenbrier such a wonderful place to live, and oftentimes their quiet and generous efforts aren’t even well-known to the general public.

“This year’s winners certainly deserve to be recognized and celebrated for their accomplishments, and we thank them for their service to our community.”

As husband and wife, Randy and Rhonda Garrett add a winning combo to Greenbrier’s team, according to the couple’s award nomination. 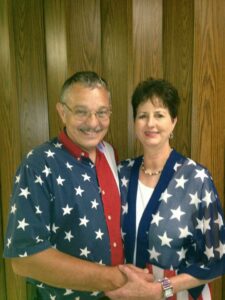 Randy and Rhonda Garrett are the 2019 Citizens of the Year.

Both are longtime organizers of local blood drives through the Greenbrier United Methodist Church. Greenbrier senior citizens are welcomed in to their home twice a year for lunch and a stroll over their Cadron Creek home.

Both are graduates of Greenbrier High School, Rhonda in 1977 and Randy in 1974.

Randy has worked for Tyler Surveying for 46 years. He served on the Greenbrier Planning Commission for 13 years during one of the city’s largest growth spurts. He presently serves on the Thorn Cemetery Board of Directors, a title which Randy has held for 40 years.

As business owners of Country Time Flea Market and Greenbrier residents, Randy and Rhonda Garrett work together for the community.

A 1992 graduate of Greenbrier High School, Jeremy’s work to establish character programs at the middle and junior high school levels resulted in the launching of the Mighty Men and the Iron Men programs. Purposed is the program at the high school level for serving both young men and women.

Jeremy was a founding member of the Soaring Wings Youth Ranch and continues to use his abilities to assist the ranch.

A daughter of Stefani and Stephen Green, Ashlie is a senior at Greenbrier High School.

Doors open at 5:30 p.m. at the chamber banquet, with dinner and the program at 6. University of Central Arkansas Football Coach Nathan Brown is the speaker. A silent auction is also planned.