It was standing-room only as the Conway Senior Wellness and Activity Center – renamed the Ola and John Hawks Center – held grand opening festivities on Sept. 4.

KTHV news anchor Craig O’Neill served as the emcee for the event, which featured a time of recognition and remembrance as the senior citizen program also celebrated its 40th anniversary.


A $2 million campaign was undertaken to make the new center – located at 705 Siebenmorgen Road – a reality. The program received donations from approximately 400 individuals, corporations and foundations, including major contributions from the Nabholz families in honor of their late aunt Monica Strack, Conway Corporation, the City of Conway Community Development Block Grant and First Security Bank. Major donors were presented with a plaque at the grand opening.


In addition, there was special recognition of Ola and the late John Hawks and their family. The John and Ola Hawks Family Foundation made a significant gift toward the center, which now bears the name The Ola and John Hawks Center. 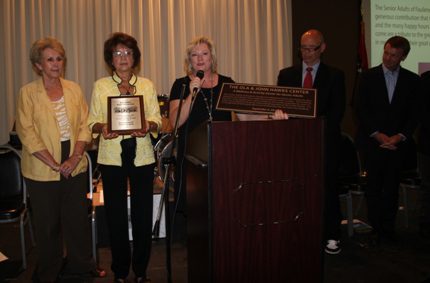 At the grand opening, Bill Pryor, chairman of the Faulkner County Council on Aging, which oversees the center, recognized and thanked board members for their hard work. He also outlined the journey that led to the new facility. He also thanked Linda Linn and Lori Melton who came on board to lead a fundraising campaign to purchase the property.

“The board never wavered on its commitment to the community or these seniors,” he said.


Six weeks ago, the seniors program moved from the Donaghey Avenue location to the new facility. In that short time, 450 more seniors have been introduced to the program.


Pryor said 100 percent of the board members personally supported the project with contributions, giving them an opportunity to name one of the spaces at the new center. He announced that the music room would be named for executive director Debra Robinson in appreciation of her 36 years of service to the program.


After thanking the board, Robinson talked about the early vision of Mildred Martin and Dr. Jewell Moore to create the senior center. She also showed the “Make It Happen” capital campaign video. “Because of all of you, we made it happen. Thank you so much,” she said. “We’ve had a great six weeks here. It’s made a difference in the lives of seniors already…It’s been everything we thought it would be and so much more…Thank you for making this dream a reality.”


During the dedication program, Lori Melton described the opening as “a special day” and thanked members of the campaign steering committee.

When introduced during the dedication, Ola Hawks received a standing ovation. She described her late husband as having a big heart for Conway and Faulkner County. “He’s smiling down on us today. I know he is proud of all who helped make this dream possible.” 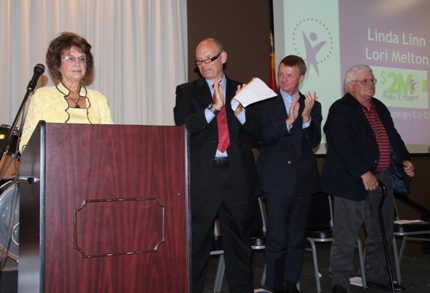 James McAlister spoke on behalf of the seniors at the center. “This center has saved my life,” he said, explaining personal challenges he faced following the death of his daughter and wife. When he started attending the senior center, he found support and new friendships. “Debra and her staff work to make this a place to enjoy these senior years.”


“You’ve saved this one,” McAlister said. “And you’ll save many more.”


(See more photos from this event in the October issue of 501 LIFE.)