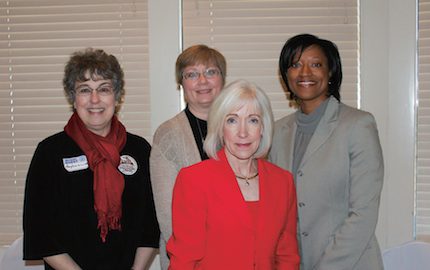 
An Arkansan with big dreams is competing for the opportunity to represent her country on her sport’s biggest stage.


Brittany Reinbolt, 33, always dreamed of representing the United States in the Winter Olympics. When the opportunity came knocking, the Searcy native took a chance on a dream and never looked back.


“I’ve done a lot of crazy things throughout my athletic career,” Reinbolt said. “I was always interested in the Olympics. I came across bobsled, and I thought it was awesome. I went up to Lake Placid, N.Y., to try out, and long story short, I’m still there seven years later.”

After competing in the United States team trials last fall, Reinbolt was named the pilot of the third sled for the U.S. national team in October, a culmination of years of hard work and training.


“While everyone else gets up and goes to work every day, I get up and drive bobsleds,” Reinbolt said. “It’s a cool experience to be in that position and see the world. It’s crazy to think that the people I spend the most time with are decorated Olympians. To be one of the leaders of the team and lead this group of girls is really special.”


“I’ve wanted to compete in the Olympics since I was 4 years old,” Reinbolt said. “It’s crazy to think that I may be just a month away from that journey. Only a few countries get to send three sleds to the Olympics. If we can beat Canada and Germany’s third sled, then we’ll be heading to South Korea. No matter what happens, I’m excited to be in this position. I’m trying to stay grounded and level headed while putting everything I have into this opportunity and training hard to do the right things.”


With a trip to the Winter Olympics on the line, Reinbolt and her team are ready to rise to the challenge.


“The competition is extremely intense at this level,” Reinbolt said. “When you’re competing against other Olympians, you have to grind through the pressure and the intense competition. Everyone has given their lives to this one goal, but not everyone can go. As a team, our goal is to go out there, accept the challenge and represent the United States of America the best way that we can.”


Although bobsled races typically last less than a minute, Reinbolt says it takes hours of hard work to prepare for that crucial minute on the ice.


“Although most people see bobsled on television once every four years, it’s an everyday thing for the athletes,” Reinbolt said. “It takes hours and hours to maintain the equipment because we are our own mechanics. We have to train hard to stay in peak physical shape — from squats to power cleans to sprints. When we’re not in the gym, we’re studying the tracks and watching videos. It’s an all-day, everyday grind. As the pilot, my job is to make sure that the sled is ready and that our team is set up and our minds are in the right place.”


Throughout her career, Reinbolt says her most important accomplishment is not an individual event or award, but rather the time spent with those who share her love of bobsledding.


“In my sporting career, it isn’t about the accomplishments, but what has gone into making it happen with my teammates,” Reinbolt said. “I can’t tell you what place I got or what awards I got, but I can tell you the things that me and my teammates have done to get there. Creating those memories with my teammates has been the most meaningful to me.”


When she’s not training or competing on the world’s biggest stages, Reinbolt enjoys the simpler things that the 501 has to offer.


“We don’t get too much free time, but when we do, I enjoy doing things outdoors,” Reinbolt said. “I always wanted to be a pilot, so I fly a little bit in the offseason. I enjoy making fun little videos and doing crazy things. I like to pretend I’m good at extreme sports, and I love spending time with my family.”


Reinbolt hopes her story inspires others to try new things.


No matter where her journey takes her, Reinbolt won’t forget the ones who helped her along the way.


“I definitely wouldn’t be where I am today without my faith in Jesus and the support of my family,” Reinbolt said. “God’s the one that put me here, and everything I do is all a gift from Him.”