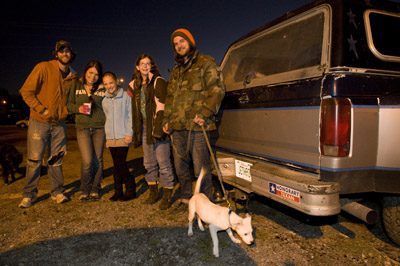 In 2010, Conway Girl Scout Troop Leader Crystal Kemp connected via social media with Shay Kelley and Kelley’s Project 50/50. The project was Kelley traveling to all 50 states in 50 weeks to help the homeless.


“I started following Shay on Facebook and Twitter, I was amazed at what she was doing and began sharing her journey with the girls in the Girl Scout Troop that I lead,” said Kemp.


“In Scouts, we are teaching the girls that they can make a difference in their community, and here was an example of a woman who took a difficult time in her life and rather than focusing on herself, focused on serving others,” added Kemp.


She was working for AT&T when she was transferred from Illinois to Jackson, Miss. In one week, she was laid off and her car was stolen. She couldn’t pay her rent and before long she was homeless. Kelley worked in a restaurant and saved up money to buy a truck and then began her journey to travel to all 50 states helping the homeless.


In 2011, Project 50/50 saw the addition of team members Shane Patrick and Rob McCain, who traveled with Kelley to do it all again. Kelley and Patrick were married in December 2010. McCain joined the team in August 2011.

Members of Kemp’s Girl Scout Troop, 6717, began to discuss ways that they could help the Project.


“The girls determined that they would collect items to donate to Shay when she arrived in Arkansas, and they did a great job,” said Kemp.
Troop members collected socks, gloves, caps, coats, sleeping bags and tents.


“I love the Girl Scouts,” Kelley said. “They create positive values and avenues for good.”


Project 50/50 came through Arkansas in December and some of the troop traveled to Little Rock to meet the team and deliver their donated items.


“We had a great visit with Shay. The girls asked her questions about sleeping in her truck and about how she helps the homeless as she travels. It was a great opportunity for the girls to see how they could make a difference and meet someone who is out there doing great things.”


The day following the troop’s visit with Kelley and the team members, Kemp received the following message from Kelley via Twitter: “Tell the girls that the little pocket tent that they donated made Larry very happy tonight. Much LOVE.”


For more information on Project 50/50, visit project-5050.com. You can also find Kelley on Twitter at @Project5050 or on Facebook at facebook.com/Project5050.