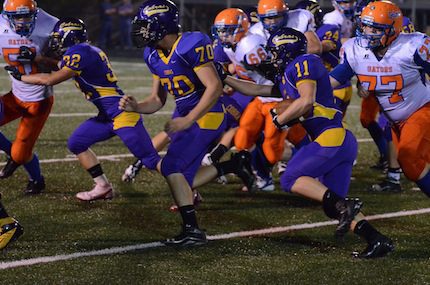 
Fountain Lake has reached the semifinals each of the last five seasons. However, since winning the Class 3A title in 2009, the Cobras have fallen short in the semifinals for three straight seasons.

After a productive offseason, where the school won its second-consecutive weight title, the Cobras return in 2013 ready for another deep playoff push. Leading the way for the offense is quarterback Carson Chandler. The speedy junior saw significant playing time last fall behind graduated quarterback James Cooper in mercy- rule games. His dual-threat potential will keep opponents guessing.


Senior defensive end Eli Westerman serves as a great motivator and defensive leader. Westerman was named to the 501 Football team this fall.


“Eli is a natural born leader, and people will follow him,” Coach Tommy Gilleran said. “He is an inspirational leader on and off the field. He will do something big in his life because of his ability to make other people better.”

Classification: Senior
Position: DE
On the field: He is a natural born leader, and people will follow him.
Off the field: He is involved in everything from church and FCA to school functions.
Community work: He is constantly doing things for this community and other communities as well.
Sportsmanship: He is always doing the right thing and saying the right thing. He is a person who wants to make everybody better.
Classroom: He is a 4.0 student.
Expectations: He was the third leading sack man on our team last year and didn’t start.
Last season: He was an inspirational leader on and off the field. He will do something big in his life because of his ability to make other people better.