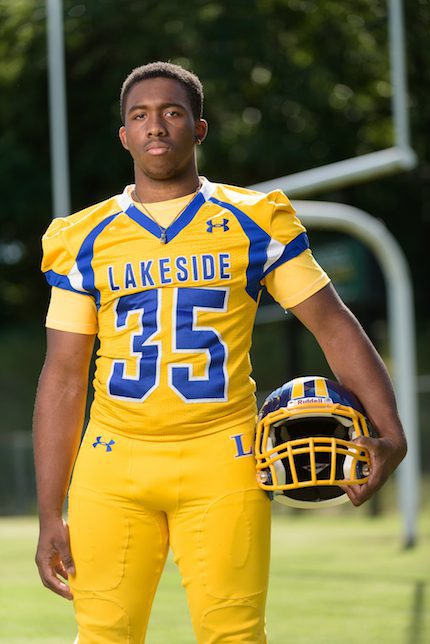 
From a rocky start to a strong finish, it has been a year to remember for Hot Springs Lakeside. As the Rams look ahead to the Class 5A playoffs, senior running back Dupree Swanson knows that each time he takes the field, it could be his swan song.

“If Friday is my last game, I know that I’ve loved every moment I’ve had at Lakeside,” Swanson said. “I won’t be thinking about it too much on Friday night because I want to stay focused on helping my team win by whatever it takes. If it takes me getting the most yards or the most touchdowns to hold my team up through the playoffs, then I give myself and my team hope and I believe that we can do anything together.”


Swanson was selected to this year’s 501 Football Team — 25 players representing all 11 counties of the 501. The team, sponsored by Conway Ortho and Sports Medicine, Conway Regional Health System and First Security Bank, boasts the best the 501 has to offer both on and off the field. The senior was nominated by his head coach, Jared McBride.


“Dupree is strong and quick,” McBride wrote in his nomination. “He’s a good role model to younger teammates, helps with football camps and volunteers at school with younger grades.”


After dropping its first three games of the season, Hot Springs Lakeside (6-4, 6-1 Class 5A South) surged to a 6-1 record, capturing the conference’s second seed. Leading the Rams’ charge was Swanson, who ranks among the top athletes in the state through 10 weeks with 234 carries for 1,676 yards and 29 total touchdowns.


“It’s been a good year,” Swanson said. “[After losing our first three games], we knew we needed leadership, but we didn’t know who that was going to be. We got together and told the lower classmen about how we were going to step up and change things. We made a promise to ourselves to make the next seven games great. We kept our heads up and kept working hard on and off the field to get better — studying film and studying our opponents. As we did that, we saw the impact it had on our team, and it’s ultimately what made us better.”


As the Class 5A state playoffs arrive, it’s crunch time for the Rams, who play host to the salty Harrison Golden Goblins.


“Making it to the playoffs in my senior season means a lot to me,” Swanson said. “Harrison’s a good team, and it’s going to come down to who wants to win more. We’re working hard this week to study film to see what we’re up against. Penetration on offense and defense, continually moving the football and getting stops will make us successful.”


Win or lose, Swanson looks forward to a bright future after his high school career is over.


“I know that I want to play college football for wherever life takes me,” Swanson said. “Since I was little, I wanted to major in health science. The athletic trainers here have inspired me to research the field, and I’ve found that it’s the right area for me. After some research, I’ve decided that it’s what I want to do for the rest of my life.”


Off the field, Swanson participates in Rams track and field and is a member of FCCLA at Lakeside High School. In his free time, Swanson enjoys singing, dancing, playing basketball, playing video games, hanging out with friends and enjoying the outdoors of the 501.


“Dupree Swanson is a fun-loving guy who enjoys life and wants to share it with everyone,” Swanson said. “My favorite quote is, ‘Never say the sky’s the limit because there’s footprints on the moon.’ It’s important to me because it means you can go anywhere in life if you keep following your dreams.”


Swanson and the Rams play host to Harrison in the first round of the Class 5A state playoffs at 7 p.m. Friday.