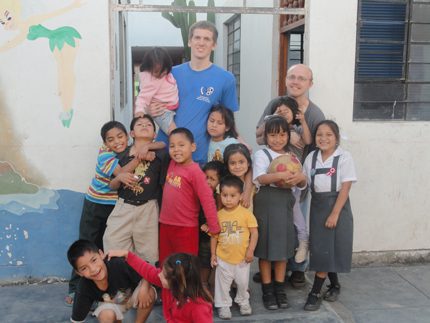 Earlier that year I had gone on a mission trip with the University of Central Arkansas Wesley Foundation to Trujillo, Peru, where we worked with local college students and a non-profit organization called the Center of Attention and Education to the Family (CAEF), which works with underprivileged, abused and/or neglected kids. Working at CAEF was the highlight of the trip for me, and I couldn’t help but feel a desire to go back to Trujillo and help out the CAEF kids again.

So, in July, I went back to Trujillo with Kelly Hale, a friend who had gone on the previous mission trip to Peru. I was determined to accomplish the work that I felt God calling us to do.

When we arrived in Trujillo, we were greeted by our host family, the Quevedos, whom we had stayed with during the previous year’s mission trip. They were so welcoming and loving to us during our trip, making us feel like a part of their family. Their house felt like a second home.  After getting settled in at the Quevedo house, we met several of the Peruvians that we worked with on the previous mission trip. It was great to see all of them again. After resting from a long trip, we were ready to get our mission work started.

Our mission trip consisted of three major areas of work: volunteering at CAEF, having a Vacation Bible School program for the kids at CAEF and taking part in a prayer study. Our major area of work was CAEF, of course. Our time there consisted of cleaning the front entrance area of CAEF — which included cutting the grass, picking up trash, leveling dirt, planting flowers in the leveled dirt, trimming a tree and painting the railings for the ramp and staircase that led down to the front door — and spending time with the CAEF kids.

It was such a heart-warming experience to spend time with the CAEF kids. They had been through some extremely difficult times in their young lives, and even after all of that, they still greeted us with genuine hugs, kisses and smiles. We had so much fun playing with them, and they were so happy to have us with them. We played soccer, volleyball and bouncing a bouncy ball, not to mention lifting them up over and over again, which put huge smiles on their faces.  We enjoyed our time with the CAEF kids so much that on our free day at the end of the trip, we spent the afternoon at CAEF, playing with the kids and watching movies.

The three-day VBS program that we had for the CAEF kids consisted of song and dance, a skit, a Bible story/verse of the day, crafts and snacks. The three Bible stories that we used were Noah’s Ark, the Tower of Babel and the Parable of the Two House Builders. The kids had a blast dancing along to the songs, trying to mirror our moves.

When it came time for crafts, we split the kids into groups based on age levels and went with our assigned groups to help them with their crafts. I was assigned the 4- to 6-year-olds. They had a lot of fun painting, but they kept wanting to use multiple paint colors until all of the paint was brown! To prevent that issue from happening again, we decided to use crayons for the rest of the crafts.

The major activity that we had outside of CAEF was a prayer study that I led with the translating help of Elisa, one of the Peruvians who worked at CAEF and had helped us plan our mission work for the trip. It was originally a six-week study, but because of lack of time we condensed it to a four-day study, taking four of the daily studies from it that I found most significant to talk about. Our topics included giving God a name based on what you see Him as in your life, a Psalm study and forgiveness. As our daily meetings progressed, the discussions got more and more in-depth, which was great to hear.

At our last meeting, we ended with a long circle prayer, and everyone stayed for a while after the meeting, with some even saying that they enjoyed the study so much that they were sad to see it come to an end.
Aside from our three major areas of work, Kelly and I also brought sermons — Kelly at the Saturday youth meeting and myself at church the next day. My sermon focused on Jesus’ commandment to love our neighbors as we do ourselves, with the focus on being sure to include even those whom we might not find as easy to love, such as those who don’t believe or act like we would like them to or those who do us wrong.

Our time in Trujillo ended in a great way, with all of the Peruvians that we worked with during the trip, as well as some new faces, throwing a surprise party for Kelly and me.

We shared laughs, played games and ate plenty of snacks. At the end, I thanked everyone and told them about how I had felt God calling me to come back to help out at CAEF. Kelly shared his thoughts about the trip, followed by everyone else in the room sharing kind words about us, including some saying that they didn’t have a very strong connection with God but our work made them want to get to know Him on a closer scale. That was awesome to hear.

I couldn’t have asked for more from this mission trip to Peru. God worked in Kelly and me in amazing ways and allowed for everything that I envisioned to happen and then some. He is so good.

I love going to Trujillo for mission work. I would recommend anyone looking to reach out to an organization in need, whether by funding or volunteering, to consider CAEF. They have a
wonderful mission and could always use help.

The feeling of getting away from the hustle and bustle of everyday life to go there and work with kids in need is indescribable. I can’t thank God enough for allowing that opportunity to happen again. Working with the kids at CAEF always brings joy to my heart, and I pray that God guides me back to Trujillo again soon.